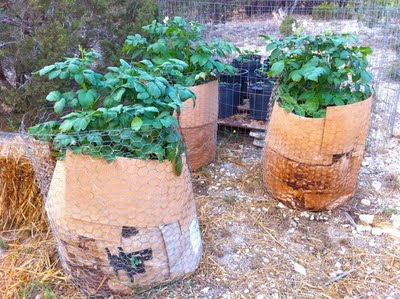 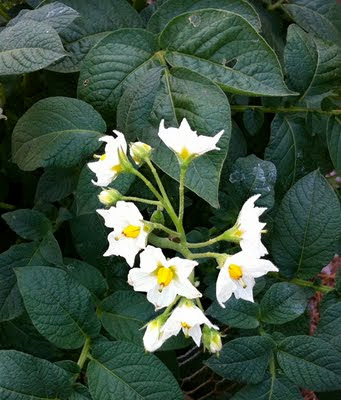 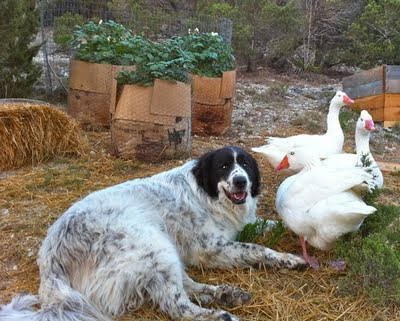 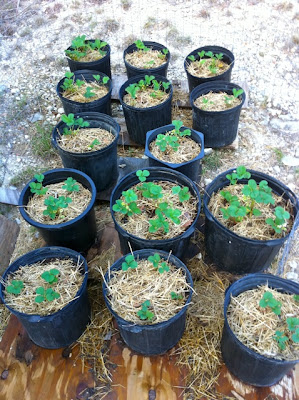 These photos were taken on March 31st, and the potato greens are now a good couple inches above the tower tops! I ran out of home-made compost, and had to buy a couple bags to continue filling the towers. Not sure if I'll do a pure compost potato tower next year. I realize potatoes can be heavy feeders, but thinking maybe a half-and-half mix of good soil & compost might do just as well.

Miracles upon miracles, the chickens have stayed out of the towers so far, and the geese have not destroyed the potato leaves. 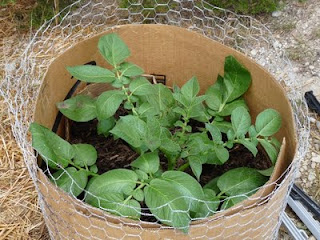 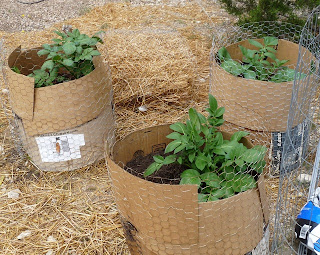 I also (finally!) received the order of low-chill cherry and white mulberry trees. I'll write more about those later, but with that order came 50 (yes, 50!) FREE bare-root strawberry plants, which I had totally forgotten about. Eep! The raised beds hadn't been filled with the custom soil mix yet, and I needed to get those strawberries planted ASAP. I grabbed a bunch of three- and five-gallon recycled plastic plant pots, filled them with a robust potting soil, and covered with well rotted (and poo'd upon) straw and hay for insulation and moisture retention. Good thing the straw was there, as we had an unexpected freeze just a few days ago. The berries (and potatoes) survived just fine, probably with a radiant-heat assist from the slope they're on, which faces southwest. The last average freeze here is March 15th, but some veggie gardeners won't put anything into the ground until after Easter.

In the picture below, about two-thirds of the strawberries are potted - there's even more pots on the ground now. The wooden boards you see below the pots are to keep the pots level for watering. The three-gallon pots have three strawberry plants in each, and the five-gallon have four or five plants each. I don't even know what kinds of strawberries these are; I'm guessing annuals of some sort. 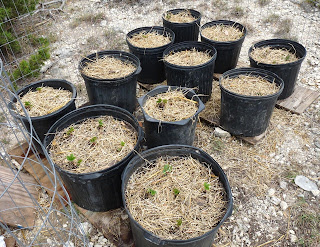 This is the first time I've planted strawberries, and doing so in containers is another grand experiment. Hoping this works out - it would be so lovely to have fresh berries for eating and jam this year, and right from my own back yard!
Posted by d.a. at April 08, 2011 2 comments: