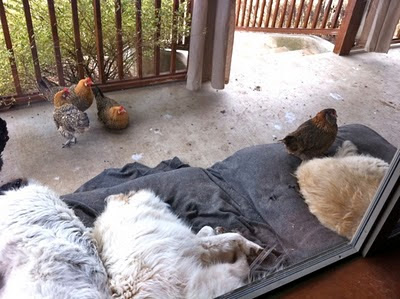 All three of our dogs are of a particular working breed called Livestock Guardian Dogs. Bandit and Maggie, on the left, are Great Pyrenees. Emma, on the right, is a mix of Anatolian Shepherd/Great Pyrenees. They guard the chickens, geese and ducks. You can see from the picture above how comfortable the birds are around them. LGDs are mostly active at night, but even while they snooze during the day, they keep one eye half open. They're up in a flash if there's any hint of aerial or four-footed predator. So far, we've experienced only six known hawk strikes (and of those six, only one successful "kill") in the past three years. Good dogs! Well, "good dogs" when they aren't stealing eggs...

Bandit: her coloring is unusual for a Great Pyr (and some wonder if maybe a wandering dog contributed to her genetics), but she does her job, and that's what counts. She's the "alpha" of the pack (after the humans, natch), but is very laid back. She thinks she's love-starved, however, and will paw Billy-Bob, our gander, for him to bite on her. She considers this to be good attention. Yeah. To each her own...

Maggie: Bandit's angelic-looking litter-mate and alpha dog wanna-be. She's an unrepentant egg-stealer and escape artist, and instigator of most things naughty. She makes up for her shortcomings with her guardianship of not only the birds, but FROM the birds. If the geese seem like they're going to gang up on a human (large or small), she'll put her body between the birds and the human.  Good dog! 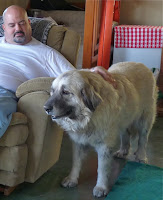 Emma:  a rescue that our vet clinic swore would be a good match for us, and so far, they're right. She came to us severely underweight and shaved down, and is now fully re-furred and weighs a good 120 pounds. She had some problems with food possessiveness (understandable, and also an issue with the Great Pyr breed), but we've worked with her to ease that issue. The vet estimates she's probably 9 years old as of 2011, and for a large dog, that's up there in years. She's arthritic and has hip dysplasia, but with meds she's doing well. She has a bark that comes up from her toenails, and altho Maggie & Bandit are no slouches when it comes to deep-sounding barks, I wouldn't mess around with Emma. She sounds fierce.

I don't think Emma was raised to be a working dog, but after training her to realize the ducks and chickens were not squeaky toys, she took to guardianship just fine. The geese? She avoids them like the plague. Smart dog.