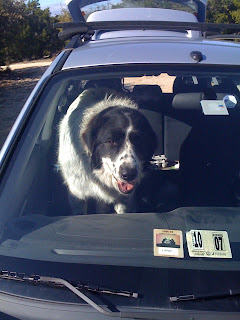 Why do we have these dogs, again? Well I know why we have livestock guardian dogs. They are supposed to guard the chickens, geese, D.A., and whatever follows D.A. home this week (you not getting off the hook for those peahens, hon). What I don’t know is why we have these dogs. Yes, they are Great Pyrenees from a working farm. Yes, they are very active at night, presumably scaring off foxes and raccoons (but not little bunnies because we see them at night within 30 feet of the house and the dogs). And yes, we have only lost one chicken to predation since they have been here.

However, all dogs have their idiosyncrasies and these two are no different. Maggie hates thunderstorms. She hates them so much you can tell how bad a storm will be just by watching how quickly she retreats to her bed on the porch. Bandit is the brave one until she gets to the vet, and then it's Maggie that becomes the happy dog without a care in the world. Bandit dutifully watches after the livestock, and is the first one to come running when the geese start squawking. She even paws at Bob, the rotten gander, just so he will chew on her: she reacts like his nips are love and affection. Maggie, however, watches the gates and not to intercept any interlopers. Nope. She is looking to escape and the last two times she left Bandit behind – so much for thick-as-thieves littermates. 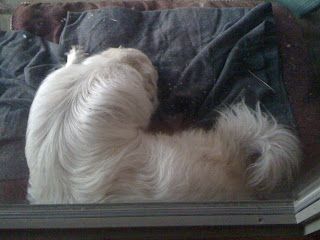 And then there is the car. The first year with us we could not get the dogs into the car. It was a virtual battle requiring heaving, pulling, and cajoling, and that was D.A. just trying to get me out the door to drag the dogs into the car. That has all changed in the last 12 months. If there is a car door open, then there is at least 110 pounds of drooling dog inside and possibly 220. Normally, it is not a big deal since you can call them and they get out. Today, however, was different.

It was starting to rain, which meant Maggie was up on the porch. The rain happened to coincide with errands for D.A. and I, who were getting in the car. As we headed out, Maggie appeared to think that we were leaving and that the weather might be nicer out beyond the eight acre fenced-in prison we call home. She followed us to the gate and before I could close it she was dashing to freedom. Bandit being the smarter (or slower) one stayed behind and barked encouragement. I am still not sure if Bandit’s barks were in support of D.A. who has started pursuit, or for Maggie who is looking for a lack of thunder and lightning somewhere two states over.

Did I mention the rain? It was a good Texas rain. The kind that made D.A. shield her eyes so she could see where she was going while running after Maggie. I think it was heavy enough to slow down Maggie because she stopped about 50 yards from the gate, where D.A. could grab her. I had D.A. put her in the back seat of my little Subaru Impreza and we drove back to the gate, where D.A. jumped out and corralled Bandit before she could get out the gate as well.

Once through the (now secured) gate, D.A. opened the rear door to let Maggie out. Maggie was fine to continue soiling my back seat, and stayed put. Bandit thought that looked like fun so she jumped in, too. Apparently this looked entirely too cozy for D.A. who by this time is completely soaked, and sent me back to the house while she walked back. She should have run to watch the spectacle that was about to come.

I drove up the driveway and parked. The dogs looked to me as if expecting a trip to the drive through for double cheese burgers or, at minimum, a trip to Dairy Queen for that new pecan pie Blizzard. When I opened the door they weren’t going anywhere. I pulled Maggie out and then went back for Bandit, who saw what was in store and jumped from the back seat to the front for my keys and a clean getaway. But since dogs can’t operate clutch (lucky for me and the local Dairy Queen) I was able to collar Bandit and drag her out. It was at this point I realized that I had either left the back door open or Maggie was able to open the door with her paws because now Maggie was sitting in the back seat right where she was when we started this story. As I went to get her, she also jumped to the front seat, which Bandit had also just reclaimed.

Now I am completely soaked and there are still two wet and muddy dogs in my car who, according to the mud splatter on my dash, prefer a lot of air conditioning and don’t like NPR on the radio. I finally get them both dragged out and then D.A. walks up and has no idea what happened until I explained and showed her the inside of the car. The dogs tried to tell their side of the story, but decided they were tired and laid down on the porch instead. I think they were thinking the same thing we were: "why do we let them live here again?" 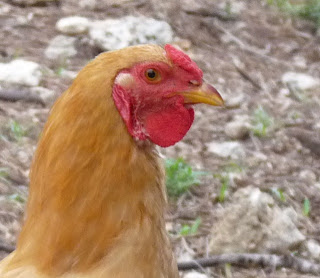 Butch wasn't supposed to be a Butch. He was supposed to be a Barbara, or a Bonnie, or even a Bedelia. Sexing baby chicks is an art, not a science, so once in awhile you'll get a male with your pullet order. (Don't ask what chick hatcheries do with all those unwanted males. You don't want to know.)

Butch the baby roo has not only discovered his crowing voice, but the fact that he has boy parts. Boy parts that desperately need to make additional lil' Butch babies. So strong is this biological imperative that I'm able to snatch him up & away from any hens he's fixated upon before he comes to his senses and runs away ("Ack, stinky human alert!").

Adolescent roosters are absolute terrors to hens, especially in the morning (guys, you know what I'm talking about). Butch, unfortunately, is no different. Hopefully he'll outgrow his ham-fisted ways soon, else his last "date" will be with the stock pot.

Joy's blog, "A Well-Armed Laura Ingalls Wilder" posts lots of good things, and one of the neat things she does is post links to interesting articles she's found. Since imitation is the sincerest form of flattery, I'm gonna steal her idea and start doing the same...

Homemade laundry soap - with some HE (high-efficiency washer)-safe recipes. Some of the recipes might require things you gotta order online, but the end result is a mix of scents & chemicals that you control, often for much less than what you'd pay at the stores:
http://simple-green-frugal-co-op.blogspot.com/2010/07/homemade-laundry-soap.html

How to grow soap-nut trees - this came out of the discussion from the post linked above. Soap-nuts can be bought on-line or at most eco-product stores. Soap nuts have high amounts of saponin, which can be used as a gentle cleansing agent. Just throw a few in a loose-weave bag, and put into the washer with a load of clothes. Naturally, I'd like to grow these. Nothing on the page talks about soil requirements, or if the plant could tolerate the natural alkalinity of the soil here... any ideas on where I could find out something like that? Anyhow, here's the link:
http://exeterra.blogspot.com/2007/08/how-to-grow-soap-nut-trees.html

And last, but not least:

Continuous lettuce harvests - something I hope to figure out how to do, as we currently feed store-bought greens to the geese, and it can be a drain on the budget. When we have a lot of wet weather, the grasses currently on the property do them just fine, but the dry seasons are tougher. Until we can get enough of the land "pasture-ized" (grow enough green grasses and fodder for the geese and chickens), growing our own might be the best bet. Plus, it'd be lovely to have constant salads for the table, too!
http://simple-green-frugal-co-op.blogspot.com/2010/07/continous-lettuce-harvests.html

Email ThisBlogThis!Share to TwitterShare to FacebookShare to Pinterest
Labels: links 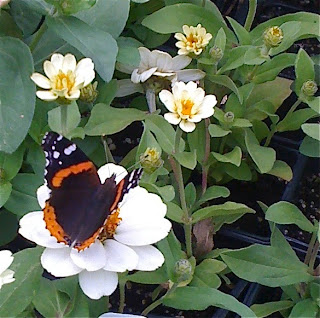 It's been the longest wildflower season I've seen in the whoppin' three years I've lived here. Salvias, verbenas, daisies of all sorts - they've been nurtured by the cooler temps and extra rain we've had in South Central Texas.

Our lawn-slash-pasture was decimated last year by the Summer drought and a hard-freezing Winter. There really wasn't much left but a few straggling weeds. I had plans to reseed with a pasture Bermuda (forage greens for the geese & chickens), plus native grass on the edges, but lo and behold: Wildflowers started popping up in profusion, in quantities never seen before! I'm guessing the chickens, in their foraging last year, "deposited" the wildflower seeds and the wet Spring did the rest.

As long as there are blooming wildflowers, there'll be no mowing on this property. Let the great re-seeding begin!