somebody stop us, please! 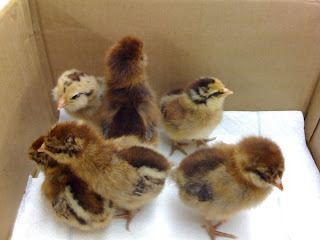 Welcome to our newest additions to the chicken flock (as soon as they're big enough to go out into the yard)! Saw them in the local feed store, and fell in love all over again. I wonder if this is what some women go through with human babies: forgetting how much work the little buggers are, and wanting "just one more"...

Seriously, we had a legitimate reason for getting more chicks. Our only two Ameraucana's died, and the two Sicilian Buttercups are looking to be roosters instead of hens, so that left us a mere four egg-layers (that is, if they're not roosters as well, hmph). We purchased six Ameraucana's this time, to ensure at least a few of them survive past chickhood.

Fact: Ameraucana's are affectionately nick-named "easter-eggers", because they lay pastel blue colored eggs. There's your educational tip for the day!
Posted by d.a. at May 30, 2008 No comments:

If there are shoes or an article of clothing you do not want dirtied, stained, frayed, stretched, ripped, or otherwise "broken in" beyond reasonable standards, do NOT wear said article while feeding, watering, walking, or otherwise taking care of farm animals. 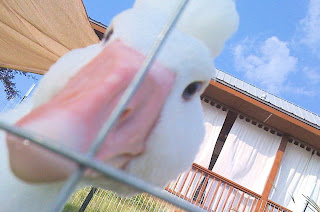 **I do not recommend letting pups/dogs loose like this if you live in an urban/suburban environment. We have enough land, and such little traffic, that the danger is relatively low.
Posted by d.a. at May 28, 2008 2 comments: 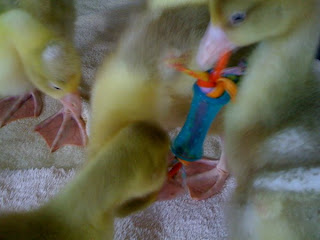 Don't know if threads look like grass, but both the older and younger sets of goslings love to chew on any hapless thread that lay in their path. They will tug, pull, chew, slobber, shake and then eat that thread, if possible. The old towels I use to line the young gosling pen don't stand a chance.

Picking up some supplies from a local pet store the other day, I happened across some tiny dog chew toys that had knotted cords coming out the sides of the middle chewy part. Hmmm... 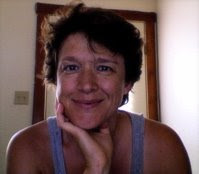 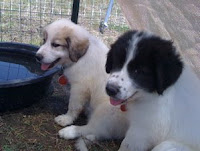 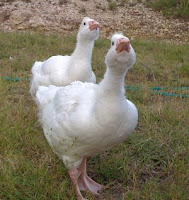 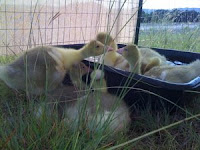 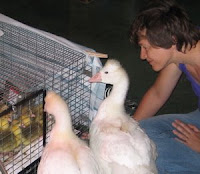