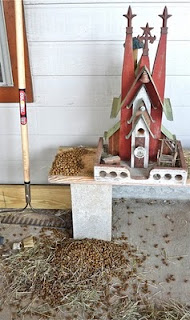 I called from the porch into the house, "Why is there dog food in the birdhouse?" When geeks live together, it's best to ask questions first before messing with something that appears to be an experiment or otherwise out of the ordinary. I was hosing bird droppings off the front porch, a.k.a. "the poop deck*", when I lifted the birdhouse and food started coming out.

"Why is there what?" Spouse looked outside the door. "Dog food? Oh, I thought you said dog poo!"

I poured the rest of the kibble out of the back of the birdhouse. Scratch grains came tumbling after the kibble, and then a small, abandoned mud-dauber's nest. "I bet there's a bird hiding away this food," says Spouse. "Can you imagine how long it took to load all this?" There were at least three cups of kibble stored inside.

"We should set up a web cam, see who's doing this work", he says. Shouldn't be too hard to do, as there's already two web cams up: one monitoring the night pen, and one looking out over the front yard. Between the cams, the dogs, the geese, and the electrified poultry netting, we have the best protected pasture-raised, free-ranging chickens in the county. Now it looks like the local wildlife is taking advantage of that protection (and the feed) as well...

*phrase courtesy of Natalie, who has a chicken and a wonderful geekly family, and writes about them over at Chicken Blog. 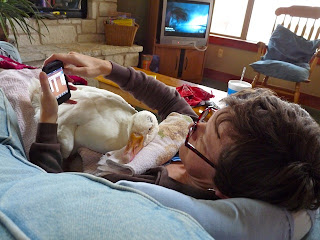 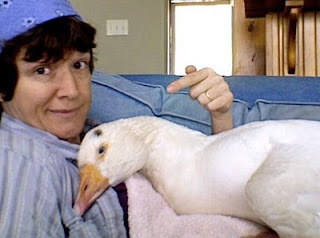 If bossiness is any indicator, Miss Cecily may be on the mend.
On a more serious note, she's walking more, and keeping her head upright for longer periods of time. She had a four week run of taking DMSO, and has been off for almost two weeks without relapse. She's not only molting, but is growing in new feathers. She's yet to put on weight - the stress from molting and new feather output takes up a lot of calories - so her smoothie feedings* are now four times a day. I've been able to space out the vitamin shots to 72 hour intervals without noticeable energy lag on her part. Hoping that once the new feathers are in, she'll quickly start recovering full flexibility and strength.

In the meantime, however, if being spoiled rotten is any indicator of health, Miss Cecily is well on her way to full recovery.

Stick-blend a handful of kale in a cup of water; strain & save juice.
Approx half cup+ of chick feed, ground into a powder.
Contents of two fish oil capsules
1/8th teaspoon of pro-biotics
One powdered glucosamine/chondroiten tablet

Mix together, and let sit for at least an hour so the grains can soak up some of the liquid. Stick blend again, adding more water if necessary to obtain a soupy consistency.
Posted by d.a. at April 13, 2010 3 comments:

We didn't plan it this way, but perhaps it's a blessing for it to happen so soon after Godzilla's passing. We just got in our order of new goslings and chicks. Four more Tufted Roman females, six buff Wyandottes, and the "surprise pullets" were two each of Brahmas, Fayoumis, and Gold Phoenix. Love them fuzzy butts! 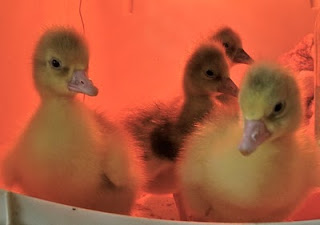 Of course, this means Billy-Bob the gander is going to have a total of nine female geese to mind, but I don't think he'll "mind" at all. 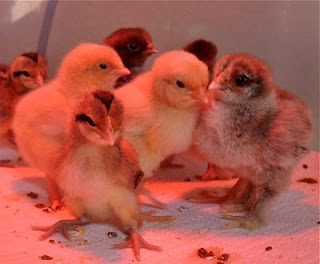 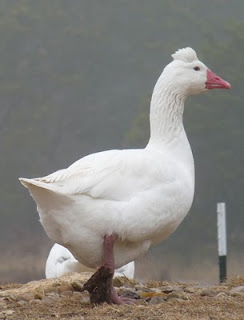 Miss Cecily's sweetheart, Godzilla, passed away early this afternoon. I had noticed him breathing a bit heavily on Saturday, and made plans to take him into the vet on Monday. Monday, his breathing was much worse. While at the vet getting tests done, he passed away. An autopsy will be performed to find out the cause, to make sure what happened isn't a disease that is/was communicable to the other geese.

Godzilla was one our two first hand-raised goslings. He was a sweet, sweet boy (except during mating season, of course). Although Tufted Romans are harem-minded, not mate-for-life types, he and Miss Cecily were always close. He and Billy-Bob both liked to come inside the house to visit Miss Cecily in her recovery area, or hang outside the porch next to the screen door and nap close by.

Billy-Bob has some big webbed feet to follow. Rest in peace, Godzilla. 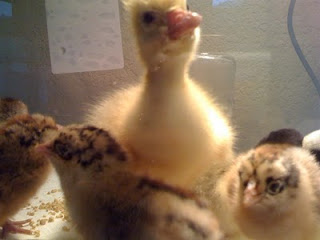 [pic top: Godzilla in the mist. pic bottom: how Godzilla got his name - he was HUGE compared to the chicks!]
Special note to Ma Nature: enough illness and death for now, okay?
Posted by d.a. at April 05, 2010 8 comments: 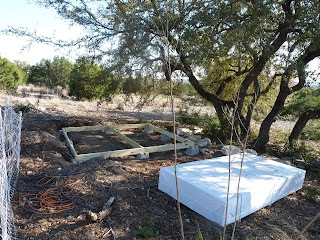 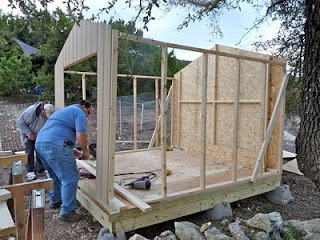 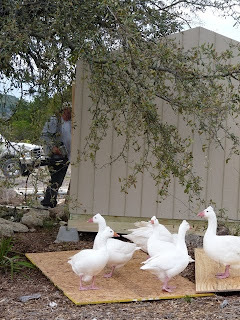 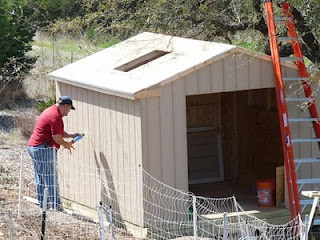