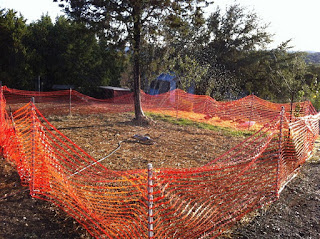 Where has the time gone? Oh, now I remember: Section off a portion of property. Rake out dead grass and rocks. Lots of rocks. Scratch up soil. Seed. Scratch again to cover. Reseed. Cover with manured/rotted hay. Water. Watch it grow while I ice my back. I imagine it's similar to having a Chia Pet, but on a much larger scale. So far I've regrown five large sections of lawn. The poultry & waterfowl are so happy to have grass to graze upon once more. I've a few more sections to grow to ensure erosion control over the Winter, and the temperatures look like they're going to stay fairly warm at least through the end of December. Come Spring, I hope to develop larger sections of pasture bermuda & native grasses further down the hill.

Other projects: we don't get alot of long-term freezing here during the Winter, but last season we had a week of below-freezing overnight temperatures, which were enough to freeze the well pump. Nothing will put you into a full-scale panic like having livestock and NO WATER for their needs. This year not only do we have a brand new 4'x3'x3' enclosure for the pump (nicely built this past week by Spouse), but we're also experimenting with heating it via a fairly low-cost method: a temperature-control plug (Thermo Cube) and a lightbulb. The cube will turn on the electricity to a 60-watt light located within the enclosure when the temperature dips below 35℉, and then will shut off the light when temps reach 45℉. Between the heated enclosure and the rainwater collection from the chicken coop roof (temporarily delayed due to other pressing projects, but hope to get to it next week), I'll feel much better about having accessible water available over the Winter.

(Speaking of the Thermo Cube - we also use it to power on/off an Eco-Heater in the chicken coop. Works nicely! If the light-bulb method doesn't work for the pump enclosure, we'll shell out the cash for another Eco-Heater.)

Then there was a rash of duck egg disappearances that needed solving. Maggie the dog, of course, was figured as the culprit. We found one way she was getting into the pen (using some hay bales to get over the fence), fixed that, then put up electric fence wire around the top of the pen. We got a full complement of eggs for two days, then the disappearances started again. Found that Maggie had been pushing up a section of the duck fence and going under. Secured the bottom of the fence, and set electric wire around the bottom of the pen. No more egg disappearances. I don't know who's more determined: Maggie for eggs, or the chickens for the compost pile.

And now that the cooler temperatures are in full swing, so are the container tomatoes. Tomatoes. In November. We could barely keep them alive over the summer, even with afternoon shade and regular watering. Now the cherry tomatoes are going nuts. I'm not complaining, I swear. I toss any bug-eaten fruits to the chickens, and toss the others into salads. The fig trees that we covered against the last two overnight freezes are putting out a few fruits as well, but I consider those bug treats at this point.

So, two pressing projects in the queue before Winter temperatures settle in for the season: install the rainwater collection system, and build the temporary greenhouse. These projects will have to wait just a few days, however, as we've got family coming into town and a whole lot of gratitude (and libations) to be had. Spouse is smoking two turkeys and a prime rib (I really need to get him to write a blog post on how he made his metal barrel smoker, and how he smokes meats). Me, I'll be drinking wine with Spouse's Italian father. Lots of wine. And icing my back. To those who celebrate, I wish you a Happy Thanksgiving!
Posted by d.a. at November 22, 2011 4 comments: