A Goose After Our Own Hearts 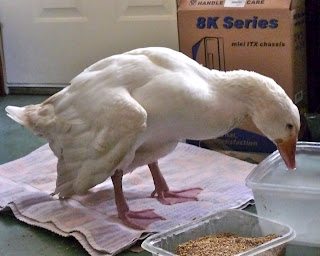 Miss Cecily loves to hang out in the computer room. I wonder what it is about that space that is so attractive. Is it the warm flow of air from the five-plus computers Spouse and I own and run? (Oh, and that's far fewer than what we use to run, believe me). Is it Spouse's taste in music? The movies he watches? Both at the same time? Or is it the small space itself?

Sometimes she makes her way to the computer room when there's no one in there. It may take her a minute or two - she's meandering kind of slowly these days - but once she's there, she finds the towel we've laid out for her, and plops down. Spouse or I will clean up the trail of poo she leaves behind in her travel, bring in food and water, and keep an eye on her. She'll hang out there for hours.

Unless a miracle happens, these may be Miss Cecily's last few days. [And boy howdy, am I open for a miracle, okay Powers-That-Be?] For her mental well-being and comfort, I'm happy that she's found a room that she enjoys as much as Spouse and I do. 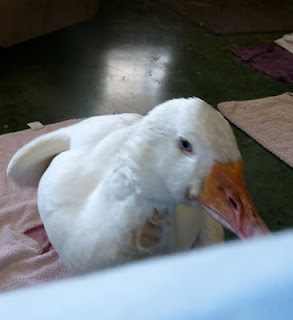 I kid you not.

She was standing on my belly as I was laying on the couch (we take naps together). She turned to the side, grunted, and let out a spurt of wet feces that arced about 12 inches long. My boots were next to the couch. KASPLOOEY! Crap on my boots, IN my boots... I about scared the poor goose with laughing.

An Army of Chickens 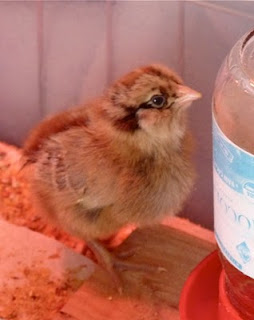 Remember that previous post where I noted which chickens we were not going to try again? Mom (who came out to help while I've been recovering from surgery) went with me to the feed store, saw a batch of those very same chicks and Fell In Love.  Three hours before her plane flight, we had four tiny fuzzy-butt Barred Plymouth Rocks and two Ameraucanas, one of whom is Mom's self-appointed namesake, "Frances".

We've still an order of four female goslings and 10 pullets (female chicks) coming in next week. More ladies for the ganders, and some buff Wyandotte chickens and "Surprise Special Pullets" mix just for the fun of it. I've also promised a neighbor's child that I'd buy a few of her pullets as soon as she knows for certain their gender. We're gonna be up to our armpits in chickens around here! 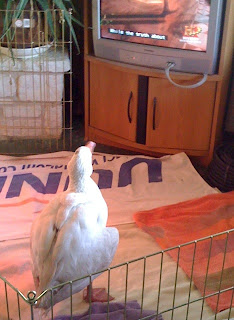 We are imperfect farmers. We fail to regard all of our livestock as such. Maybe it’s because both of us adore underdogs so much. The weakest of our flock get the most care from us. There is Red, the "short bus" Ameraucana chicken. She is not very smart but very tame and therefore the first one to get picked up and loved on. Anyone harasses poor little Red then they go in the stock pot. There is Billy Bob – the scoliosis goose - who was a packing peanut in the shipment of female geese. He came out of the box with a cut on his head and a chip on his shoulder. He will come after D.A. to prove he is the head gander (at least when Godzilla, the real head gander, can’t be bothered) and she just grins at him and says how cute that is.

Then there is Miss Cecily, the goose with a slow heart beat, indeterminate gender (we got x-rays to prove it), and arthritis. There is no such thing as a free puppy and the same goes for a $12 goose. Her arthritis was preventing her from keeping up with the rest of the flock. As such, she became the goose who got left behind and therefore became the goose we had to pick up and hand deliver to the non-stop goose party. At first she would try and run but the arthritis made that hard, so then she'd just sit and wait for us to pick her up. Last Fall she developed an illness whose effects included weight loss and a inflexibility that prevented her from sleeping normally or preening herself. She is definitely part of the underdog clan and now has the healthcare plan that the rest of us can’t get through Congress.

We tried many remedies and several vets. It finally came to the point where we decided to put her down and D.A. took her to our primary vet for the last trip. The vet in question knows us and we have even rubbed shoulders socially (it is a small town) so he asked for a one-day reprieve for Cecily while he called a newly acquainted university specialist. The result? Our $12 goose is on a strong free-radical scavenging drug* and getting fed extra calories & supplements through a tube 3 times a day. Now you understand the picture. Cecily is in our version of the semi-private hospital room with the requisite TV privileges and noisy neighbors (us).

We are running the island of misfit toys but for geese, chickens, and peahens and, before you ask, we have no vacancies. That is the official answer but even that answer is imperfect just like us.

*DMSO - used by humans, horses and dogs but Cecily is the first goose test case.