Twenty Bales in a 19-Bale Truck

Alternate title: "Don't ever let a country boy tell you how much your truck bed will hold." - Spouse 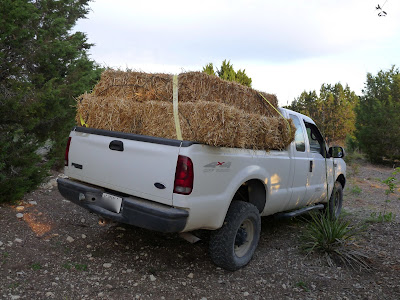 We've done things like this before - see "Moving Via the Nail-biter Express" - and it was well past time to do it again. I found a good deal on the season's first fresh straw bales* on Craigslist, and asked Spouse to help me to pick up a truck-bed's worth. I was thinking ten, maybe twelve bales max. We got to the farm site, the guys started loading, and then there was a brief confab between Spouse and Farmer about estimated safe load. "If you stack them like this, you should be able to fit a few more...". Well, we know how that goes. Twenty bales of straw (and cash paid out) later, the Farmer quickly skeedaddled, and we were left with a load that wobbled back & forth like a Dr. Seuss sketch as we hit bumps and turned corners. The bungee netting I had brought wasn't strong enough to keep everything firmly in place, so we hit the closest hardware store we could find for more tie-down straps. And a bathroom break. We almost sh*t ourselves driving the few miles there.

Load (relatively) more securely in place, next decision was how to safely get back home before dark. Choose the faster toll road? 80-miles-an-hour may cause problems. Choose the slower freeways? More turns, heavier traffic, but the lesser speed limits might be safer. Spouse chose the latter, and white-knuckled it all the way home. Other farmers on the road were looking at our load like we were crazy. And crazier still: we kept driving, going past our home and into town to get pizzas. Neither of us were gonna be in the mood to cook after all this. 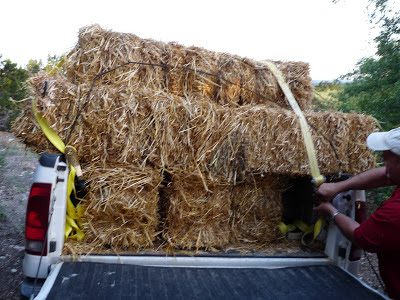 We got home just before dusk. "So," says Spouse, "which would you prefer to do in the dark? Take care of animal chores or stack straw bales?" Decision: animals first. Then we set up two wood pallets for stacking. [Not a good idea to stack hay or straw directly on the ground here, as ants will quickly make the bales their new home.] Stacked nine bales (3x3x3) on one pallet, eight (3x3x2) on another, and the remaining three stacked on a couple of cement blocks. Done. Whew.

Moral of the story: Why do ridiculous things like this yourself when you can do it vicariously through our blog? On the other hand, the good news is we've enough straw for our raised vegetable beds and bedding for the ducks for probably the entire year. Sweet!

* What's the difference between hay and straw? Hay is made from dried grasses and greens (like alfalfa), and is meant for livestock consumption. Straw, on the other hand, are the castoff stalks from harvested cereal grains like oats, wheat and rice, and are not meant for consumption. Straw is used for animal bedding, a lightweight mulch for veggie beds, and sometimes even structures are made from straw bales. In a garden setting, the difference between laying down hay versus straw is kind of like laying down sheets of paper versus small bamboo stalks. If it gets wet, the "paper" (hay) will mat down, whereas the "bamboo stalks" (straw) will shed more of the water and not mat. Both will decompose eventually. Straw is less expensive as well, about one-third the price of hay.