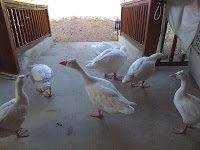 We discovered one of the younger goslings walking around with a heavy limp yesterday. Spouse and I checked her out. No broken bones, just some bruising on her ankle. May have sprained it on the rocky terrain around here. Spouse recommended that we keep the geese in the large pen instead of free-ranging today, in order to let her rest and heal up a bit.

This morning, the limp was worse. Eeek!

I had used the homeopathic remedy arnica montana when practicing Aikido to quickly heal bruises and sprains. I had heard that animals also respond well to homeopathy, and thought, "what the heck". Sprinkled arnica montana tablets into all their drinking/soaking tubs. As of this afternoon, I can't tell which goose had the limp. It is gone.

Homeopathy is one of those healing methods that I still have a hard time believing in its efficacy, but it keeps showing me that it works.

[Photo: the geese discover the front porch. Piles of poo were generously given.]
Posted by d.a. at June 30, 2008 No comments:

Are you sure there's no bugs? 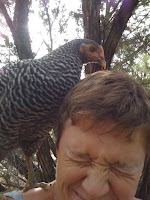 We used to call our two Plymouth Barred Rocks "Crash" and "Airborne", but now we just call them both "The Hausfraus" - they look like stereotypical stocky little German farm wives. This photo was snapped with my iPhone - do you know how hard it is to snap a self-photo with one of these things? - while Hausfrau was pecking through my highlights. "Are you sure there's no bugs in there? Are you sure?"

[a slow couple of days with Spouse home, and me taking time off to recover from swollen joints. more posts soon.]
Posted by d.a. at June 30, 2008 No comments:

Two drills at the same time 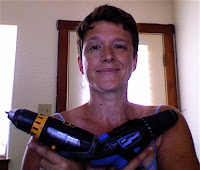 Spouse showed me the cool trick of using two drills on projects - one for drilling pilot holes, and the other for putting in the screws. No swapping back & forth of bits. Time saved, patience saved, works great, less filling.

A Letter to My Puppies 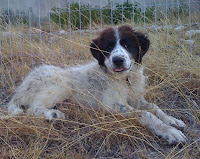 Dearest puppies of mine,

You don’t know how lucky you are. You have a genuine guardian angel looking after you by the name of Auntie Karen*. Auntie Karen was a dog rescue worker, and is very adamant about proper training and taking good care of puppies like yourselves. Which is a good thing, because if it weren't for valuing her opinion, yesterday’s antics would have got you [action redacted]. Serious as a heart-attack, I was this close to [action redacted]. 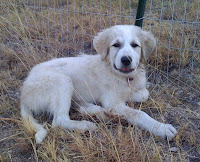 You do that again, and I’m gonna [action redacted] and ship you off to Auntie Karen, whose dogs will then eat you for lunch. Okay? Okay!

Your owner with a developing eye twitch

*a good friend
[photo: Bandit & Maggie, respectively. As of this morning, they're still alive.]
[Edited on 6/26 for better clarity. Actions remain redacted for self protection from Auntie Karen. Puppies remain living as of this date.] 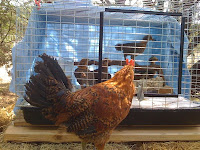 I Have Learned From My Mistakes - Honest

I completed two, count'em, TWO carpentry projects last week. I may have planned both in my noggin, but I put the plan & measurements on paper this time (woohoo!) and used 99.9% leftover scraps and screws we had around the house. I even wore gloves most of the time. No blisters or scrapes!

Project #1: The free-standing goose feeder has metal feed hoppers, which are slotted over screws on the backboard. The roof is hinged so all I have to do is lift it up to pour feed into the top of the hoppers. The hoppers are actually made for small pigs, but the geese EAT like pigs, so it's a fair use I think. There's enough room for four fat... err, full-grown geese to feed at one time. Or six chickens. Or two dogs. They've all tested it successfully - whether approved to do so or not - since it's been set up. Anyhow, the roof also protects the feed from rain and direct sunlight. As the chickens and geese are on organic feed now, preventing spoilage is a priority. Looking forward to those first tasty eggs! 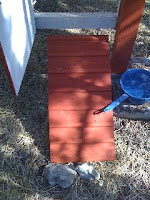 Project #2: This next project wasn't as sexy, but it also turned out well - a ramp out the back of the chicken coop. This leads to the shady area under the cedars, and so is the easiest way for the chickens to get to & from. It's attached underneath the coop's frame with safety hook & eyes, so it can be removed when we decide to move the coop. Since the back area wasn't originally designed for a ramp, rigging something up was Necessity being the Mother@#$! of Invention and all that. Chickens are using it, so I'm gonna count the project as a success. Oh, and the blue enamel pot you see to the right was bought for 50 cents at the local thrift shop. Thought it made for a pretty secondary water container for the chickens. Beauty in all things for the girls, you know.
 
Posted by d.a. at June 23, 2008 No comments:

Chicken on My Shoulder 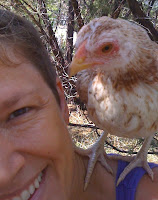 [Sung to the tune of John Denver's "Sunshine on My Shoulders"]

"Chicken on my shoulder makes me happy
Chicken pecking my eye can make me cry
Chicken on the water gets real pissy
Chicken almost always makes me hiiiiiiigh... "

Everybody loves the compost bin 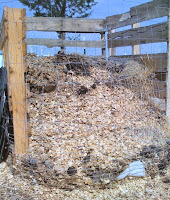 I wouldn't mind so much if they'd choose the "dine in" option, but no, they prefer "carry out". It's bad enough that we've a comforter's worth of white feathers blowing about from all eight geese going through puberty right now. Nope, gotta strew about the corn cobs, used hay, old paper towels and wood shavings all over the place as well. Home sweet home.

Current keep-out strategy? Wrap leftover fencing around AND over the bin. Let's see how long it takes before they find a workaround. I swear sometimes these animals were brought into my life to keep me humble. Nerd skillz don't stand a chance around here.
Posted by d.a. at June 19, 2008 No comments:

Doing the morning chores, I saw one of the pups intently licking on something. Thinking it was maybe goose poo (good word, the palates dogs have), went to check it out. The pup was chewing on some poor dried out frog. Where she found it, I have no clue.

Later in the day, I found the frog deposited on the front welcome mat, next to a couple of dry rawhide strips that we usually give the pups. Think this is a request?

[forget it, dog. get yer own dang frog jerky.]

p.s. I have an entry on making hay bale furniture at All In Good Health. Yeah, our household is sophisticated like that.

Waste not, want not 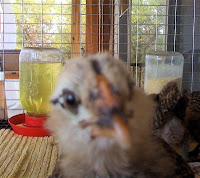 The grass has gone dormant in the dryness and heat. Even the weeds are looking pathetic. This means there's much less green fodder for the geese. I've been chopping up a whole head of romaine each morning for fodder, but there always remained a nub/core of romaine that was too short & tough for the geese to grind down. Seemed a waste to put into the compost heap. 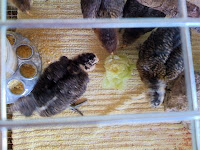 This morning's post-coffee bright idea: let's see what the chicks will do with it! I put it into their hutch, and backed away slowly. The chicks tore into the romaine with fervor, peeping and running around with pride whenever they tore off a piece.

No more compost heap for the romaine nub.

I don't think this is what Subaru intended... 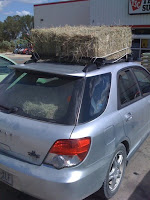 I would (and still do) brag that my Subaru WRX wagon "can haul stuff AND haul @ss!" This, however, is probably NOT what Subaru intended for their car: 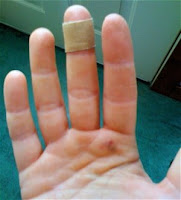 1. You look at a problem, and get inspired to Create A Solution.
- Tired of our animal pens with their cobbled-together shade coverings making the yard look like a refugee camp, I decide to make framed shade awnings! Yes!

4. You don’t talk about the project with a more experienced carpenter.
- "I know what I’m doing, sheese!"

5. You don’t set the plan on paper
- Usually preceded by mistake #2.

7. You decide to get creative with other supplies, using them for unintended purposes
- "Sure, those brackets are for use on inside corners, but I can use them for outside corners, right?"

8. You forget to measure the problem that Needed A Solution
- "I eye-balled it, it looks about right; if not, I can rig something up." Famous last words, that “rig something up”...

9. You make the Solution anyways

Now you have a lovely Solution that doesn’t fit anywhere and has to be bungee’d to various poles and fences in order to work as intended. While bandaging your hands, console yourself with the thought that at least the refugee camp looks more like a shanty town at this point. Enjoy!
Posted by d.a. at June 12, 2008 No comments:

You know you've been busy at home...

...when you finally remember it's been two days since you last brushed your teeth. Umm, yeah. Time to go take care of that.

In the meantime, I've put up some additional shade stands up for the geese, and will work on making more permanent, wind-resistant ones that I can walk upright underneath. When it comes time to muck the goose pool again, my back will thank me.

Temperatures will be near 100 again today. The pups and geese are now living together in one big pen, and gleefully playing "mine!" with whatever large water containers happen to be nearby. It may be time to splurge on a kiddie pool.
Posted by d.a. at June 11, 2008 No comments:

Home again safely. Only a few hours of time with Spouse before he's on the road for work and then his vacation. While I was gone, he put up an honest-to-goodness, four-line clothesline (thankyouthankyouthankyou!) and trimmed/cleared a four-foot-wide path through the brush along two sides of our property line. We now have a clear boundary on which to train our pups - yeah, wish me luck on that - and a brush pile 9 feet high.