Our two Golden Phoenix hens - oh, let's call them Cagney & Lacey - both went broody within a week of each other, and by combined effort hatched three fuzzy peepers about three weeks ago. Ever since, both have claimed ALL three chicks, and I've gotta say from the looks of it, co-parenting rocks. 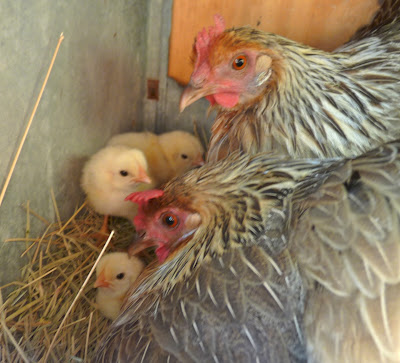 Twice the vigilance, twice the defensive power against curious geese and chickens (these girls have SPURS), twice the teaching opportunities. Oh, and twice the effort I don't have to put into raising a new batch of peepers.

The new chicks are learning the ropes fast, and the moms introduced them to many chicken pleasures quickly, including the roost. 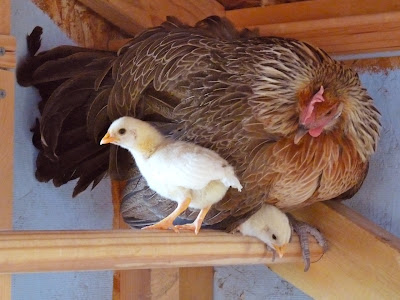 Now let's pull back a few feet, and show you how high that roost is... 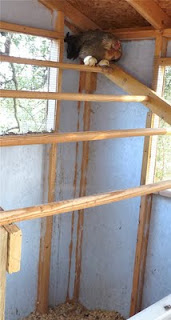 Yeah, the human mama-hen about had a cow when she saw them all up there!

The chicks maneuver quite well, actually. They climb up the ramp (which you can't see in the pic), then walk over the middle support beam that holds the perches, right on up to the top perch. If they want down in a hurry, they simply jump - their light weight and the deep sawdust litter below makes an easy landing. If they want to take their time, they'll jump from perch to perch. Their vertical leap is astounding. Is there a Chicken NBA? 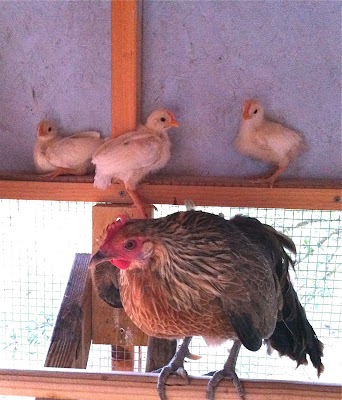 I first heard of Tree Collards on Growing Your Greens, an inspirational food gardening YouTube series. I saw the tall, graceful form and wondered, "hmm, could I grow these here?". The more easy-to-maintain perennial foodstuffs I can grow, the better!
From the Perennial Tree Collards blog, I found out that Tree Collards are a perennial shrub/tree grown in the sub-tropics & tropical highlands. We might get just a tad too cold here, but I'm hoping if I put it in a protected spot with a South/South-West exposure (or at least protect it from North winds) it just might work here. Folks are growing it all along the Southern US states, and in California as well. I've seen small snippets of back-history to the tree collard - how African Americans in the South passed these on from family to family - but haven't seen any more details yet; will keep researching. I love the stories of how plants travel...

Tree collards don't seem to bolt like other greens, rarely flowering and going to seed. The seeds also don't germinate "true", so any propagation will need to be through cuttings. Found a bit more information on how to grow & maintain tree collards from Richards Farm. I've ordered some cuttings through Bountiful Gardens (along with some Kakai pumpkins that make hull-less seeds), and look forward to trying these out.
Posted by d.a. at June 06, 2011 1 comment: