She couldn't pick herself up from the floor. If I was able to help her onto her feet, she was at most able to take three steps before she was back on the ground again. I was helping her stand to drink water, to move around. Her eyes were still bright and alert, but the rest of her body was no longer willing to continue.  It was a hard decision, but in the end, it made sense to have her euthanized. I know, I know - for animals, the term is supposed to be "put down", but you know what? She'd become such a part of this family that I just can't use that term. My apologies to the purists.

Spouse said that I always doted on Miss Cecily, even when we first got her as a gosling. Something about the tilt of her eyes, her Very Small Tuft, her calm demeanor, her insistence on sleeping on the dogs' beds, always finding a way around or under any obstruction we'd put in place. How she and Godzilla were sweethearts, even though Tufted Romans are harem-minded by breed. And in the house: how she'd grunt in front of the refrigerator when she wanted greens, or would stand by the stove when she wanted her smoothie. Then how she'd tug on the hem of our shorts or pants, as if stamping her foot impatiently, while we got her food ready. And don't you dare forget to let her have her daily nap on your chest. If you missed the regular nap time, she'd stare you down with those beautiful, beady blue eyes until it felt like a laser piercing your skull. Must. Obey. The Squeezle.

We're having her autopsied to see if some sense can be made of what she went through, in hopes it can help other birds in the future, and I'll be sure to post results here as well. We can't get her intact body back, but can get it back cremated, so that's what we'll do. Some have said that very few people would have gone to the lengths Spouse and I did to keep Miss Cecily going, in hopes she'd heal from this strange malady. I don't believe this makes us either heroes or fools - it's simply something we did for a beloved pet who gave so much to us. I daresay others would have done similar.

I found a bit of her goosedown on the floor today (amidst many other feathers, as she was going through her Fall molt). In time it will be put into the compost bin, like all things, even eventually our own sweet selves. For now, however, it's on my desk. I pick it up and give it a kiss now and then. Much love to you, Sensei Cecily, Guruji Goose. You taught me so much about life, illness and death. Sweet breezes and fair journeys.
Posted by d.a. at September 29, 2010 16 comments:

What Was That Word Again? 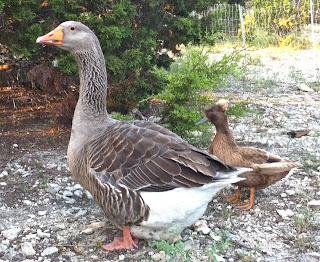 "There's a little word I'm gonna teach you", my neighbor said. "It begins with the letter 'N', and ends with an 'O'." But-but-but.... it was an abandoned pet goose! With a duck buddy!! How could I say 'no'? I imagine my neighbor would snicker, then patiently attempt to show me how to shape my mouth to make those sounds.

With that said, let me introduce two new additions to the Big Softie Ranch: Gertie the Pilgrim Goose, and Moe (short for "mohawk") the (as best I can guess) Crested Khaki Campbell Duck. We've had them for about a week now. Gertie is slowly winning over the crabby geese already on the property, starting with Billy-Bob the gander (of course). Moe is getting to know the chickens a bit better, and is no longer stuck like glue to Gertie's side. Lest Moe have problems with species-identification issues, we've ordered ten more Khaki Campbell ducklings to keep her/him company. You know, because it's not right to have one of any particular animal on the farm. Yeah... (ahem). Besides, getting the new batch of ducklings will get Spouse and I off our backsides to finish up the Gooselandia pond. What was going to be an in-ground stock tank has now morphed into a small, slope-sided pond with fish-safe pond liner. We'll throw in some minnows and goldfish to keep the mosquitoes and algae down to a minimum, and... what? 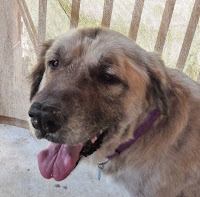 Speaking of "no" and lack thereof, Emma the adopted dog is now definitely "one of us". She proved it by refusing to budge from her napping space, forcing me to work around her as I finished installing lattice on the side porch for the evergreen wisteria. Just like Maggie and Bandit, she figured I'd work around her. Yep, one of us!
Posted by d.a. at September 11, 2010 4 comments:

Submit to the Chicken 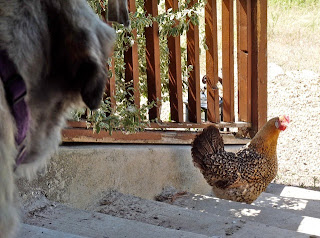 "My, what big teeth you have Grandma!" I thought as I was giving Emma a look-over a few days ago. Not only are her teeth bigger than our other two Great Pyrenees, but her paws are larger as well. Online research has found that between her Anatolian genes and the Great Pyr genes, she could get up to 130 pounds. Holeeeee smokes! That makes now the time, while she's still under-weight, to get any lessons on submission done.

Emma, as she's coming out of her shell, is showing herself to be very playful, energetic, and curious in the mornings. Not that this is bad, it's just a bad combination while she's tailing me on the morning chores. I'd open the coop doors, and Emma would want to sniff, pounce and chase those fluffy, squawky things around. Uh-oh, not good at all. Firm orders of "no!" were unheeded, and distractions didn't last for long, so it was time to make her Submit to the Chickens.

I picked up one of the more docile hens - a fluffy Brahma. Then I grabbed Emma. Underweight though she may be, it took all of my weight shoved against her to bring her down, and even with my 155 pounds it took a good thirty seconds of wrestling to get her onto her side: one arm around Emma, trying to get leverage, and one arm holding the (now very annoyed) chicken.

Emma still has her spirit, I'm happy to say. She did not submit quickly, but she did "get it" once she was down. She relaxed, I kept the chicken in her face, and she looked away. I may have to do this a few more times to get the lesson sunk in thoroughly, but I think she's teachable.

Dog wrasslin'. I reeeeeaaaaly hope the security cameras on the property have recorded over that morning's takedown already.
Posted by d.a. at September 02, 2010 4 comments: