Spouse and I took the month of November by storm, cleaning up the house & property and getting projects wrapped up with an energy akin to two toddlers slamming down a 64-ounce Big Gulp container of Mountain Dew. Unfortunately, the blogging suffers when I'm busy, so here's some recent stuff I shared on Twitter: 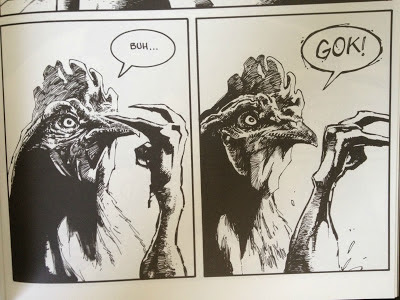 * "Sometimes you get applause for not being dead." George Carlin interviewed by a young Jon Stewart: http://youtu.be/UzmD9GEpdTw

* While cleaning one of the waterfowl wading pools, slipped on some duck crap & landed on my ass. "Slicker than goose shit" has a competitor… 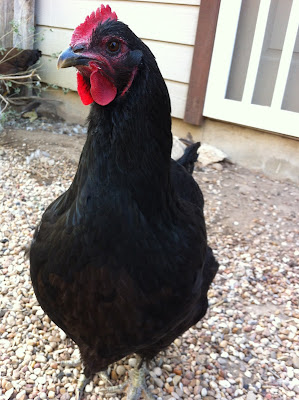 We've had one unexpected dip to 32℉, and Nervous Nelly here didn't know if the sweet potatoes were okay. The sweet potatoes were originally planted in April this year from a spud that was sprouting on the kitchen counter. Next time, I'll feel more confident to leave them in until temps are in the mid- to upper-30's consistently. Sweet potatoes aren't an item grown much around these parts, but I figured they'd be perfect in a raised bed, as long as the soil was kept moist. The raised beds did an excellent job.

The two halves of potato sent out lots of runners and leaves, taking over almost the entire bed, although the harvestable tubers stayed close to the original "seed" spud. All-together, I'd estimate a bit more than five pounds of sweet potatoes were harvested. About a third were as wide as my fist: not huge, but not bad either. The smaller ones, once cured, could probably be cooked all at once and made into a nice mash. Anyhow, had to be very careful digging up the spuds as the skins are very delicate before curing. Found only two grubs during the dig, and the chickens were happy to dispatch.

It's a bit too cold to "cure" the spuds outside now, so I laid them out to dry off a bit on a screen, then put them into perforated bulk lettuce bags I had planned to take to the plastic bag recycling station at the grocery store. [Read all about curing sweet potatoes on this site.] The warmest room in the house is where the gas water-heater resides, so I rigged up some wire shelving with wet towels so the spuds get enough warm-air circulation as well as humidity. Sweet potatoes really are best suited for growing in hotter climates, but am hoping I can work out a system to grow more (and earlier) next Spring - maybe do some research to see if there are others that are especially suited for this zone/climate. [Michelle of Blessed Acre Farm blog writes in the comments below that sweet potatoes are grown in zone 5b in MA, so there's a wider variety than I originally assumed!] Thinking perhaps using some perforated black plastic over the soil where the spuds will grow for heat,  and maybe some recycled soda bottles with the tops cut off, over the top, for frost protection.

In other garden news:

The organic Anasazi beans that I planted from a bag bought from the grocery store? I harvested them today. It's not going to be much of a harvest, as I only sprouted a couple, and left them on the vine until crispy dry. It was mostly an experiment to see how viable things like organic beans from a grocery store can be for growing new plants. It looks like as long as the beans haven't been irradiated or otherwise processed, it can be done!

The monster cherry-tomato plant, found growing in the compost pile and transferred to a raised bed, is STILL going strong. Spouse is anxious to save seed from this freakishly hardy tomato, and I agree - it's a keeper. Oddly enough, some of the other tomatoes that didn't fruit much at all over the Summer are now putting out some nice looking fruit. I don't know if they'll have time to ripen before the next cold wave hits, but I'll keep them going for as long as I can. The ones in containers will be transferred to the Winter greenhouse to see if they can stay healthy & keep ripening/fruiting. The Matt's Sweet Cherry tomatoes, tho' prolific, won't be planted again. Spouse and I are both too impatient to harvest these tiny little gems.

Speaking of the Winter greenhouse... it's frame was repurposed over the Summer to hold an extra-large kiddie pool, with ramps for the geese & ducks to climb and an experimental water filter. The filter was a success, keeping the water clean for days on end as long as we kept the pump filter cleared (and no ducks laid an egg while swimming). Unfortunately for the birds, I do need the greenhouse back, so the pool structure will probably be taken down once it looks like overnight temperatures are going to stay in the 30's.

Until then, it's temps continuing to remain 5-7° higher than normal, with days in the mid-80's and nights in the upper-50's to low-60's. A quote that seems apropos:


"Choosing shorts or long underwear on a particular day is about weather; the ratio of shorts to long underwear in the drawer is about climate." Charles Wohlforth, The Whale and the Supercomputer.

Feast Day at the Farm

As mentioned before, now that the outside employment contract has ended, I have more time to continue regular farm projects. One of those is grocery shopping at reasonable hours, especially during the time the city co-op puts out their free bags of organic produce trimmings for public usage. The trimmings are ostensibly for one's compost pile, but I've often found that much of it is of excellent quality for our birds, and some even for our own soups & salads!

I brought home two bags of trimmings yesterday. Distributed the lettuces & fruits amongst the menagerie, then put the remainder into two shallow cement-mixing pans for continued noshing. This time, I remembered to snap a few photos during the feasting. They're not the best pics (some are shot through the screen windows, most are in shade or in starkly contrasting light), but I hope they give you a smile...