As Protective As A Manager...

...of a young starlet against the paparazzi, Flopsy the Hen is brooking no nonsense from me or anyone else. That's HER baby, and don't you forget it:

From the coloration, I'm thinking Buster is the father. Not quite sure if this is Flopsy's biological progeny, as I didn't check the color of the egg she was sitting on, and there was no leftover shell that I could find after the hatching. I'm very happy that Flopsy was successful, as I hope to have our hens brood and raise any new chicks in the future. Of a few rare breeds I'd like to try, it can be easier to get fertile eggs instead of day-old chicks. Plus, having a mama around to show the chicks the ropes, keep them warm, clean any pasty butts, etc. - I'm all for it!
Posted by d.a. at November 19, 2010 6 comments:

Hyperbole and a Half: Dogs Don't Understand Basic Concepts Like Moving. Seriously, I laughed until I cried. Her graphics really capture the story. If I need catharsis for any reason, I'll go read one of her entries.


Made this recipe recently, and love it soooo much I wanna crochet a sweater for it: Cider-Braised Kale with Sweet Cherries. I ate the contents of the entire pan.

Getting ready to re-build the compost bins. The chickens have become very adept at getting into the compost contents, leading to more compost laying about the bins than inside the bins. Will continue to use pallets, but will line with chicken wire to keep the girls from pecking the contents out from between the pallet slats. You can find different ideas for putting together pallet compost bins online, like, here.

If you live in zone 8 or hotter, growing certain stone fruits like cherries is near impossible due to the scarcity of chill hours. There's now low-chill cherry trees available for sale. I pre-ordered mine from Raintree Nursery for March delivery. The trees are named Minnie Royal Cherry and Royal Lee Cherry; both are needed for cross-pollination (i.e. you won't get many cherries unless you have a second, somewhat unrelated cherry tree nearby with which to share pollen). I'm so excited! Do note that birds love cherries just as much as we humans do, so I've also ordered a few Silk Hope Mulberries and some Blue Elderberries in hopes of distracting the birds away from the cherries. Yeah, wish me luck with that...

Security Theatre: what the latest TSA intrusive body scans and pat-downs are accomplishing. Know your rights, and know where you can complain. (thanks Christine!)

Coming up soon: pictures of our Barred Plymouth Rock hen, Flopsy, and her new baby chick. Yay, another successful momma in the flock!
Posted by d.a. at November 18, 2010 1 comment: 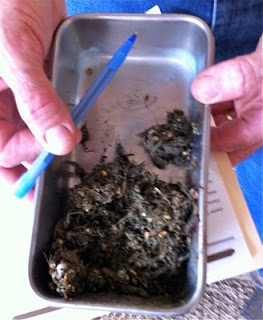 ...just received three-figure dollars worth of surgery yesterday. Red, the Ameraucana hen, is a pet. She's a bit addled - she thinks the geese are big roosters - but she's scrappy, and lets us pick her up and snuggle her. So when I picked her up the other day and noticed a foul smell and the golf ball sized lump of her crop, I knew something wasn't right. Research narrowed her symptoms to a sour and impacted crop. Brought her inside the house and tried some of the suggested home remedies, but the crop wasn't getting any better (nor the smell... yeesh). Called the vet the next day, who took Red in immediately.  Lavaging her crop wasn't budging the contents, and so they asked - and received - permission to open her up. 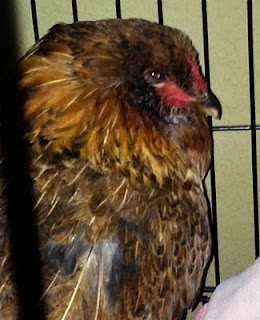 Red had stuck in her crop: her regular feed, grasses, larvae, seeds, grains, bugs, other greens. She's definitely got a varied and healthy diet! What has caused the lack of crop motility is now the question of the day. There were a few flagellets found in samples taken from her crop, but it's hard to say for certain what's going on. In the meantime, she's our housemate for the week. She needs some time to recover from the surgery, grow in some feathers on her chest where she was shaved, and receive regular medication. On the list: antibiotics, de-wormer, and other anti-parasitic drugs. Soft cat food with probiotic powder to help her gut achieve balance again. Electrolytes in her water to help rebalance any possible dehydration issues. And hopefully getting some rest, which means holding back much fussing on my part. Get better soon, lil' chicken gurl!
Posted by d.a. at November 03, 2010 5 comments: