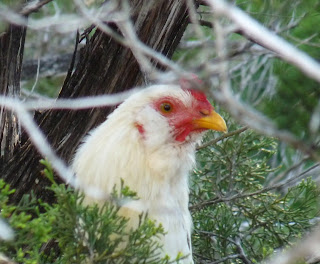 It's been almost four months since Specklebutt Jr., aka "Little Peeper", was born. We still don't know if Peeper is a hen or a rooster. A crossbreed of an Ameraucana hen and a White Leghorn rooster, s/he's flighty and wary, made all the more nervous by the fact s/he's at the bottom of the pecking order. S/he usually sleeps away from the rest of the chickens, although the second-to-the-last chicken in the pecking order - one of the Sicilian Buttercups - will often roost with her/him.

Peeper hasn't crowed yet. The Leghorn roos were crowing at six weeks of age, but since we don't have an Ameraucana roo for comparison, it's hard to say if this is normal or not. Peeper does have some of the long-ish feathers like the Leghorn roo, but since I've not seen a Leghorn hen, can't say if this determines Peeper's gender or not either. All I know right now is that I'm gonna have to get a ladder into the tree to grab Peeper & the Sicilian companion tonight for a thorough head-lice powdering. Wish me luck.
Posted by d.a. at November 18, 2009