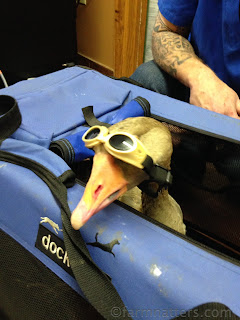 To end this post on a lighter note, here's a pic of Gerdy at the vet, getting ready for laser treatment on his feet. One of the vet techs put the goggles on his eyes as a joke. The other snapped the photo. The rest is giggle history.
Posted by d.a. at June 28, 2015