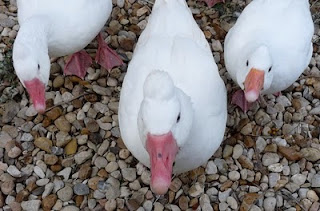 Or, "it's waaay too early for this sh*t, guys." Godzilla and Billy-Bob had been growing more & more agitated whenever I was around the girls these past few weeks. Princess and Duchess started wooing each other two days ago. This morning there was a three-some in the Pool of Woo when Duchess got annoyed that Billy-Bob was on top of Princess, and decided she should be on top of them both. Then tonight, the first of what will be many fights as Billy-Bob and Godzilla battled for the alpha male position.

The lead gander can change between battles. Billy-Bob was lead for about a month last year, with Godzilla taking over for the remainder of the breeding season after one huge Battle Royale. This year, Billy-Bob is once again taking the top spot early on, but one can't count out Godzilla. If the boys duke it out when the gals are around, the gals will circle and cheer on the fight. Tonight, the boys ended up half-flying, half-rolling downhill while they both had beak-holds, trying to wingbeat the other into submission.

Egg-laying season should be starting around the end of January. Huh, I guess it isn't that early after all...
Posted by d.a. at December 16, 2009