First Goose Egg of the Season!

First goose egg we've nabbed before the dogs have, that is. It looks like the geese started laying a few days ago, but the nest areas were empty. Where were they laying? Not in the new nest boxes, but in the duck shelters while the ducks were away. That's my size 8 hand holding the goose egg. 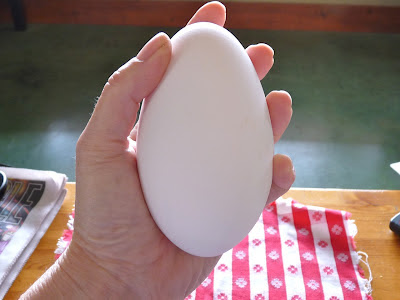 This egg was found, surprise-surprise, in the modified goose shelter that they've rarely used since the thing was originally built three years ago. Spouse espied a goose settling into one of the compartments earlier this afternoon, and we kept our eye on it. Once the goose was off the nest, I knew it was a race between me and the dogs who as to who would discover & get to that egg first. I won this time, w00t! Dogs: 3, Humans: 1.

For a bit more perspective on size... 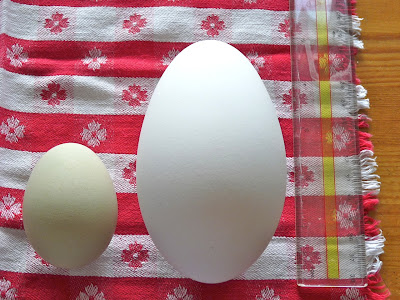 ...the ruler is showing the egg is about 5 inches long. There's an extra-large chicken egg to the left. Click on the pic for a larger view. The egg is probably a double-yolk, which is a cool thing for us humans, but not so good for the goose - if she were to try to hatch the egg, the two goslings would never come to term. No twins allowed in egg hatching, just not enough room. Another reason why we don't let our geese hatch their own, as the geese we obtained from a commercial breeder have consistently had genetic problems. Could be due to a bad brooder box, could be issues with their stock of geese. Regardless, it's probably for the best: letting domestic geese raise their own babies results in holeee terrors. The geese we've raised by hand tolerate us. Their babies would feast on our carcasses.
Posted by d.a. at February 04, 2012