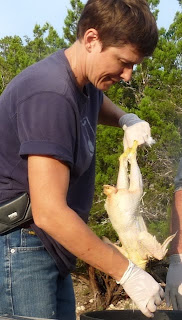 This post is not for the squeamish. Those who choose not to eat meat will not want to read further, okay? Okay!!

We finally butchered the roosters Sunday night. I thought about documenting the process, but honestly, there's so many sites that already do a fine job on home butchering instruction that I'll leave it to them. I had expected to be freaked out by the process, but was surprised to find that I wasn't - just nervous that I'd screw something up or cause undue suffering. Our friends Joy & Robert led Spouse & I step-by-step through the process. I said prayers of thanks for the spirits of the roosters whose lives we were taking, and made sure that the cuts I made would take their lives quickly and cleanly. I feel like I've fulfilled a personal philosophy at long last: if I'm going to eat meat, I should take part in the process of taking the life of that animal, or at the very least, observe the process of doing so at least once.*

We did our best not to waste a single part. Feet will be used as part of soup stock. Edible organs were divided and saved for later meals. The heads were taken to a remote cow pasture and dropped off for the fox & raccoons. Guts & feathers... well, I had hoped to bury them in the compost pile, but the chickens and dogs have done a number on the mass of the pile, and I feared there wouldn't be enough matter to keep the stink down. I did, however, water the pile with the fouled processing water.

We gave our teachers two of the roosters (and all the livers they'd like) as thanks for their instruction. [I know I've said it a bazillion times, but Joy & Robert, you rawk. From the bottom of my heart, thank you!] We butchered ten roosters total. There's one rooster left - his name is "Lucky", of course - who I decided to keep around for now, as long as he doesn't get stupid. If he does, well, I now know how to adjust his attitude, permanently.

* That said, I don't think we're going to make a habit of raising our own roosters for meat, but never say never. If we do, I'll want to create a much more spacious enclosure and roost. What we had worked well, but I'd rather have something where I can stand upright & walk into for easier cleaning and care.
Posted by d.a. at September 21, 2009