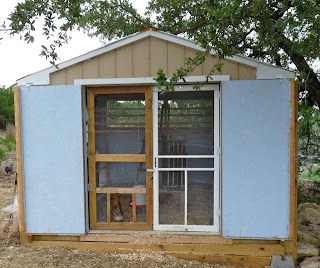 [Many images, this will take some time to load.]

What can I say, we’re a couple of geeks.
Here's the breakdown of the coop...

Doors: The original shed doors are solid - well, as solid as pressboard and 2x3's (original hardware) can be. We added latches to the outer shed walls to attach & keep the outer doors open when desired. On the inside entry right is a recycled screen door; had to shorten it to 70”, then used hardware cloth instead of regular screen cloth for durability. The second screen door on the left was made from scrap lumber and various pieces of hardware cloth remnants. There’s a small entrance in the bottom middle of the left door; we’re hoping it's small enough to keep our egg-poaching dogs OUT. If not, easy enough to put in another piece of wood to make even smaller - it would still be plenty big for the chickens to get through. Anyhow, the screen doors swing outwards as well, so the sawdust litter stays in place, and we can easily sweep everything out when it’s time to clean. The inner & outer doors latch snugly together in various configurations, to guard against predators trying to squeeze into the coop from this direction. 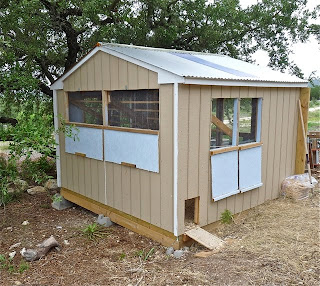 Windows: the window covers flip down, as there’s no easy way to have the covers open & stay upright. Plus, with the strong winds we get around here, making the covers into some sort of awning is just asking for them to be ripped off the building, I kid you not. The window openings were cut open with a Sawz-All, and the cut-outs were attached and reinforced with wood, hinges and latches. The window openings, like the screen doors, are also covered by hardware cloth - more expensive than chicken wire, but much sturdier. The windows that go across the length of the back of the coop face South. The wall that has the smaller windows face East, which is the same side that has the second (main) entrance.

Main Chicken Portal: this is the entrance where we let the chickens out in the morning, facing the Eastern rising sun. Currently a manual opening system, but Spouse has plans & parts for a solar-powered automated door (which I’ll make sure he posts when the project is installed). 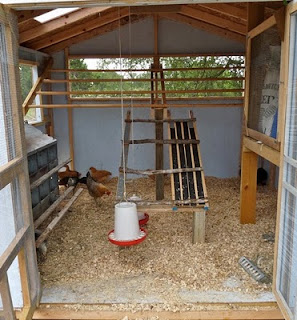 Inside... Roost & Ramp: the roosts are made from pine rounds (look like closet poles, but less expensive). They thread through 2x4's on the sides of the coop, and are supported in the middle by 2x4’s, attached to a 4x4 upright that is toed-in to the floor. The ramp & “young chicken” roost below the main roost is one piece. It is removable for cleaning, and connects to the main roost via rubber-coated bicycle hooks. Non-skid tape was used on the ramp, and cedar branches roosts. Legs are 4x4’s.

A skylight was cut out of the roof on the East (left) side, and covered with a piece of blue-tinted corrugated roofing. This will provide additional light in the Winter, when the girls are inclined to lay less during the shorter days. It also keeps the inside from looking gloomy. All things in beauty for the ladies! 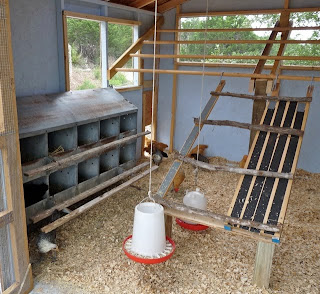 Laying boxes: picked up a ten-cubicle laying unit at a roadside antique store for a third of what we would have paid for new. The cubicles are roomy: even the Jersey Giant hens have no problems sitting comfortably inside to lay. You can see the east-side entrance in the back.

Feed storage: on the right of the coop is where the feed is being stored. Still trying to decide if we want to put metal cans beneath the cabinet space for open bags of feed. That same space could also be used for a chick brooder, or to store bags of pine shavings for floor litter. There's a screened door covering the feed cabinet, but there’s also still enough room on top for one particularly determined pullet to fly up & roost. We’ll need to put a wide piece of wood across the top opening to keep her from doing so. 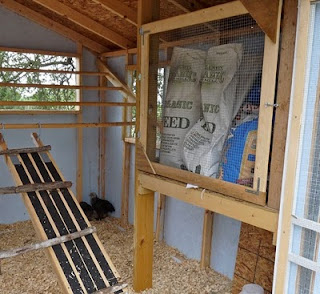 Yet a few more mods are in the queue:
Between Spouse’s construction know-how, Uncle’s assistance, and my over-engineered projects, this ticky-tacky shed has turned into one solid coop. And now, after all this construction, I want a compound miter saw. Serslay.


[Addendum: Chickens in photos not scaled to size - except for the one Sicilian Buttercup, these are all seven-week old pullets, just introduced to the coop last night. Still too scaredy to go foraging with the big girls yet.]
Posted by d.a. at June 05, 2010