Getting up to “manage” the animals is a time-honored, if sleep-interrupting tradition. The usual time for this is the crack of dawn. Unfortunately our sleep habits make this too #$%^ early. The animals disagree but I firmly believe that if our animals had a snooze button they would be getting up at a civilized afternoon hour like the rest of us.

Letting the chickens out of the coop is the priority, since they fuss about knowing that the lazy geese and ducks are eating up nature's bounty that must have sprung up overnight while they were locked in their cell. In order to free them from their sleeping quarters (and allow me to stay in mine) I have tried several methods of automating the chicken coop door. The first was a process control system that was cool but expensive and rejected after an expensive part failed.

The cheaper alternative we used for several months was based on an inexpensive power screw driver and an outdoor timer. I modeled it on the one shown here. The screwdriver displayed is no longer available and I had to adapt it to the cheapest cordless screwdriver Harbor Freight had available. This solution worked well but would commit suicide unless we kept the area under the door free of debris. The chickens seem to sense this and deposited as much “debris” as possible. It would take a couple of hours to remove the burned-out relay and solder in another.

Finally I read about the drapery motor. Yup - d.a. re-decorated the coop with roman shades… uh no. There is a drapery motor that will run one way and then the other as power is applied. It is a little pricey but I was tired of inhaling solder fumes and it was worth a try. It worked great all summer, but when it got cold the rubber wheel that the rope travels on started to slip. I tried fixing it with a thinner, rougher twine. This worked for a few days until the twine got wrapped up in the roller and the motor fried itself. The replacement twine was too thin.

We ordered another motor. I changed the design to include some pulleys and a counterweight so the motor wasn’t doing all the hard work. The result is shown below. I have since added a sheet metal cover to keep the chickens from bombing the drapery motor with more “debris”. 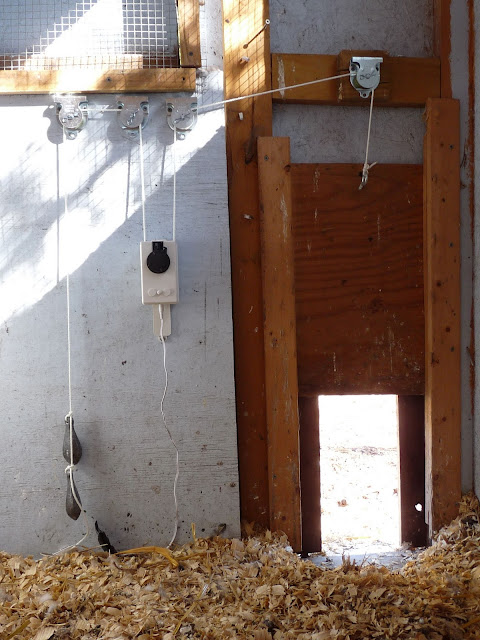 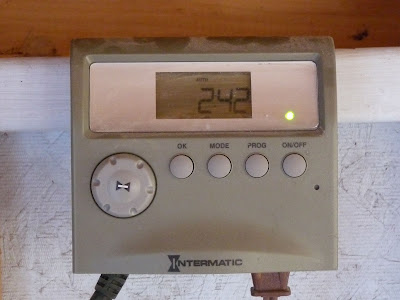 Flash movie of the door in action: