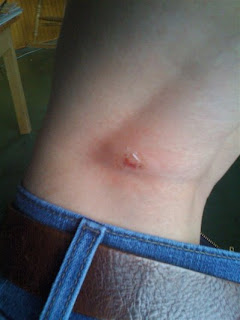 Godzilla was just doing his job. I was trying to herd Billy-Bob out of the gaggle (for reasons I'll get into below), and Billy-Bob was using the females as cover... which led Godzilla to mistakenly believe I was hassling the females. Uh-oh.

Godzilla got a good beak-hold on the back of my knee (through the jeans, no less), and wing-beat the living sh*t outta my leg. He remained latched on until my attention was directed towards him, and then gave me a couple more beats for good measure. Once it was clear I was no longer going after "his girls", he let go. I'm really proud of him, despite the hurtin' he put on my leg. He's doing his job: full-force offense when needed, then letting go when danger is over. Good boy! 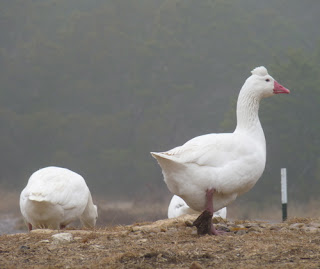 On the other hand, Billy-Bob's personality has recently gone from charmingly cranky to down-right mean. He's getting rough with the ladies, and is bullying and interrupting Godzilla's wooing as well. We've enough ladies for them both, so it shouldn't be a matter of competing for scarce females. The past few mornings we've taken to isolating Billy-Bob from the group until they've had a chance to eat some greens in peace, then let him out when they come over to the pen to "see" him. I realize it's getting to be mating season, but mean poultry/fowl get eaten, and if he doesn't calm his crotchety-@ss down soon, he's going to become Sunday dinner. Seriously. The only question will be the method in which to do so.