Back In The (Chicken) Saddle 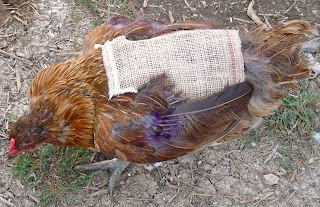 Modeling the latest in chicken fashion is "Red". Red has a bald spot the size of a quarter on her back with lots of broken-off feathers surrounding, as well some broken-off feathers on her wings. This is due to being gnawed on by the geese. Whereas all the other chickens take off running if the geese come near, Red bops along like nothing's going on. You see, Red thinks the geese are big roosters. Once the geese are close, Red "assumes the position". The geese then set upon Red until Red figures out she's had enough, and takes off. 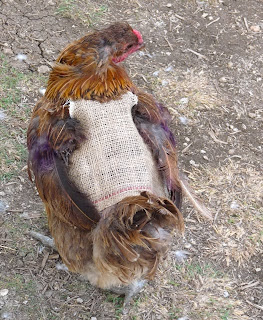 I ran across the pattern for this protective chicken saddle on-line, and Spouse sewed it up this afternoon. We chose to make it from a wide-weave burlap for air circulation, plus the burlap should still be tough enough to withstand both the @#$!! geese and the @#$!! roosters. Red didn't give much thought to the getup when we put it on her, only adjusting the straps that go around her wing base a few minutes afterward.

I'm already thinking of making copies in different colors and fabrics. Everything in beauty for the girls, you know.

P.S. Your eyes are fine, there is indeed some purple coloring on Red's wings and back. The purple on Red's feathers is from a spray-on product called "Blue Kote", which has an ingredient called gentian violet. It's non-stinging antiseptic for abrasions and cuts.