Hills Be Not Proud 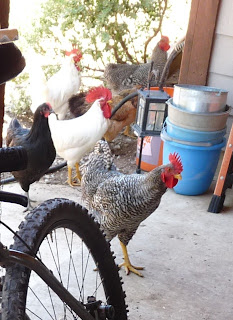 I left my car keys in Spouse's vehicle, and he went on his merry way to Houston. No spare key in the house. Nice guy that he is, he called to ask if I wanted the keys overnight mailed. Unfortunately, he called while I was napping, so all I heard was "spare key" (as in "do you have one"), and mumbled "no". "Are you sure?" "Yeah, I'm sure *mumble-mumble*"...

Today was delivery day to the Bountiful Sprout Co-op. I also put in my first order of other's goods - a produce basket, some ground pork, and five pounds of Roma tomatoes for a small canning experiment. "No problem", I thought, "I'll just ride my bicycle there. It's only two miles."

Nice thinking, Tex. Too bad you didn't consider that #1, you haven't ridden your bike in almost three years, #2 you'd also be carrying extra weight in a backpack filled with eggs, ice, and produce, #3 it's over 100° F today, and #4 you are aerobically challenged.

I huffed. I puffed. I wheezed. They don't call this The Hill Country out of perversity. It's the reason why hard-core cyclists like to train here. It's why Lance Armstrong, for goodness sake, lives in this area. It WAS uphill both ways, I sh*t you not!

I got to the co-op delivery site and collapsed. Water out of the tap never tasted so good. Cindy let me hang out with her in the air-conditioning while the rest of the deliveries came in. As soon as my ordered goodies were available, she let me take them. Then there was the ride home. Oh, gawd, the ride home...

I wasn't completely stupid on the return trip. I got off the bike and walked it up the biggest hills, although I rode for as long as I could.

So, am I proud? Hard to say. Ask me tomorrow after the pain sets in.