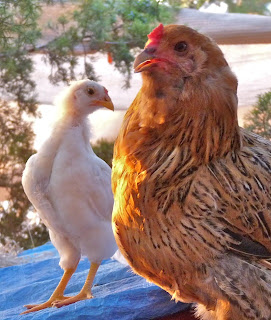 All's well in the barnyard. Specklebutt's "Offspring" is growing like a weed, and is at the face-only-a-mother-could-love stage where s/he's half fuzz, half feathers. Mom and Offspring are spending more time apart now, but Offspring still likes to hang out close to Mom when Mom is around. Last bit of rain we got, I found Offspring trying to snuggle under Mom's chest while they were roosting in the cedar. Everybody, say it with me: "awwww!"

Offspring has also found a way into Compost Pile #1 (which is ready to be put into the garden). Plenty of bugs to scratch out & eat, and no competition from the other chickens - they can't fit through the fence holes like Offspring can.

As far as the other chickens go, they're all doing well, too. Since finding the out-of-coop laying spot, I've now enough eggs to start selling through the co-op again, which in turn pays enough to feed the chickens. Nice!
Posted by d.a. at August 28, 2009