Who Laid This Egg? 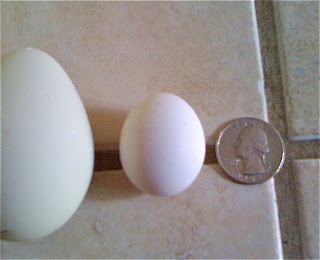 To the far left is a size Large egg, from one of the Ameraucanas. To the right of the Large egg is a teeny, tiny egg - see how it compares in size to a quarter? If I'd found it on the ground, I might have mistaken it for a particularly plain-looking quail egg. 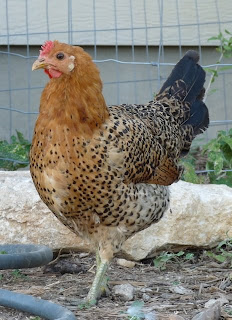 As it was found in the laying coop, I'm thinking it came from one of our teeny, tiny Sicilian Buttercup hens. These hens are far from mature, but I heard one doing that particular "ugh, I think there's an egg coming through" cluck a day or so ago, so it might be from one of them.

Then again, the Jersey Giants are starting to do that same "ugh!" cluck as well, but since they're as large as the Ameraucanas at this point (despite being the same age as the Sicilians), I'm thinking probably not.

[Pic: the elusive Sicilian Buttercup. It's rare to get a photo of them that isn't a complete blur. They're so twitchy & flightly, you'd think we ran around beating them all the time. Wonder why the Sicilian roosters we had before weren't like this?]
Posted by d.a. at August 04, 2009