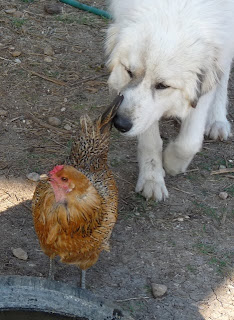 She was crashed on the front porch dog bed this morning. Unusual, but I didn't think much about it as I set out to do the goose & chicken chores. A few minutes later she ambled gently out into the yard, where I then saw three porcupine quills sticking quite prominently out of her nose. Ahhh... so THAT'S what all the excited barking was about last night!

Put Maggie into a headlock, and yanked out the quills one by one. She was growling by the second quill. By the third quill, she was ready to take off. I let her go, whereupon she immediately attacked Bandit who was lolling innocently nearby. Perhaps she was blaming Bandit for last night's adventures?

[Pic: Maggie sniffing a chicken butt, probably much like she did with the porcupine last night, but with less trauma.]
Posted by d.a. at October 21, 2009