Spouse writes: The un-hemmed Ikea white curtains for $30 a pair were a great way to minimize the sun exposure on the front porch. We were able to use 6 sets to shade the southwestern exposure of the house. That was two years ago.

After two years, the curtains became a rainbow of color from the bottom (early colonial mud) to the top (white-ish brown). And the sun bleaching, plus the wind, and plus the geese/dogs/chickens produced rips, tears and all sorts of sundry holes. 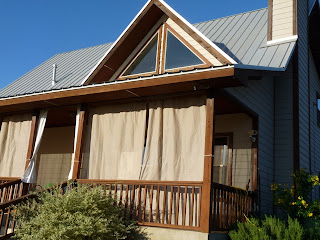 We looked for outdoor fabric, but at $15 to $20 a yard times the 42 yards (at 54 inch widths) we needed required more money than I wanted to spend. We ended up going with Saddle Tan Sun Screen by Easy Gardener, which the hardware box stores carry in large rolls for less than $5 a yard, and at 72 inch widths which meant that we only needed 24 yards of the stuff.

It took one three-hour stint just to see how it would work. After I got the process worked out, I did the rest in an afternoon. I used jute webbing for the top and the side reinforcements. For me the longest part was putting the 13 grommets in each of the curtain panels. Nine grommets are inserted on top for the curtain rings and one grommet for each side to anchor the panel to the railing. 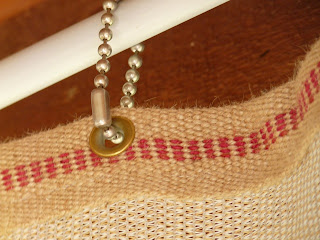 During the trial run I used an inexpensive hand punch that looked like a pair of pliers. After the first panel my hands were pretty much done. For the rest of the panels I used a nice heavy anvil and cutter, which made clean cuts and tight grommets.

The top of each panel is attached to the still-functional Ikea curtain rods using shower curtain rings with roller bearings. The old Ikea curtains hung from fabric loops, which caught on the rod and required some “persuasion” (a.k.a. a long stick) to shut or open. The new rings and roller bearing allow the curtains to open and close without the need for any “persuasion”.

D.A. says that the best part about the new curtains is that they are slightly see through so you can still make out the view from inside the house.

[And a "before" pic (complete with puppies)] 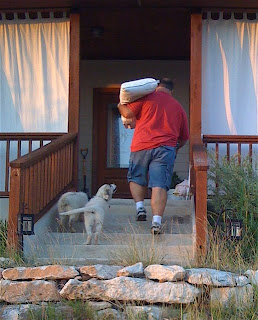