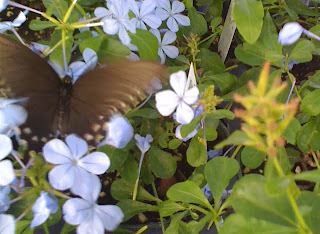 Uhh, I may have done something really stupid. In my haste to get the property quasi-cleaned up for a visitor, I trimmed our Texas Sage bushes... in the dark.

Okay, okay, I did have the outside lights on, but I'm now thinking that trimming at night might have been a mistake. Still, the bushes were growing so lopsided. Plus with the recent rains softening up the ground, they were all leaning at different angles, and covering up the view from the windows as well. (Dwarf Texas Sages, these are NOT. "Estimated three to five feet tall", puh-lease!).

Spouse and I have been trying to play catch up since the Summer of H3ll on Earth, and I've been carving out time where I can: between rain storms, or before/after work. Sometimes that means the only time I may have is after sunset. Anyhow, I'll post pics of what was done tomorrow - success or failure - when there's light enough to snap a photo. Perhaps that would be a good rule to keep in mind: only shape plants when there's enough light for photographs?

In other news, I've received permission to bring in my good camera to take photos at the plant nursery, and also to post here on the blog. I see some amazing things at work that would be lovely to share.

[pic: Butterfly on Plumbago flowers, taken at the nursery with cell phone camera]
Posted by d.a. at October 14, 2009

Email ThisBlogThis!Share to TwitterShare to FacebookShare to Pinterest
Labels: plants