"If you're going to continue selling eggs" groused Spouse, "then let's get at least a few more egg layers so we don't run out here at home." Good point. The girls produce just enough medium & large-sized eggs to sell in order to keep them in feed ('tho not quite enough to cover those slack-@ssed geese & peahens). Time to get a few more chickens, woo-hoo! 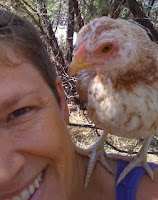 Current thinking: a few more Cubalaya hens. Cubalayas don't mind the Texas summer heat, being a Cuban breed. They're smart, calm, friendly to humans, and yet don't take any guff (see blog entries on Nutmeg and Cinnamon, our pecking order enforcers). The Red Cubalayas are easiest to get, but there are other colors as well. They lay medium-sized eggs, which don't sell as well as the large, and so means a few more eggs to keep for ourselves. That's a young Cinnamon on my shoulder in the pic to the right.

We're also thinking about trying Red Sex-Links (aka Red Star). We saw these chickens at a farm doing rotational pasture-grazing, and the girls were friendly and productive. If I can get my hands on some, I'd also like to try a few Buckeyes. Their mouse-catching prowess sounds intriguing! 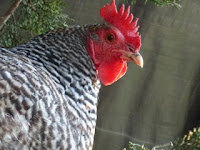 One chicken we don't plan on getting again: Barred Plymouth Rocks. Don't get us wrong, they're terrific hens and we love them, but as Spouse put it, "Barreds have bad luck with us". Outside of Frau, the head honcho whose pic is on the left, all other female Barreds we've tried to raise have met their Maker by getting mangled by some farm animal here. The male Barreds were such jerks that, well, they're currently residing in our freezer. Let us give them mercy and not try to raise any more.
Posted by d.a. at January 27, 2010