You'd Think We Were Killing Them 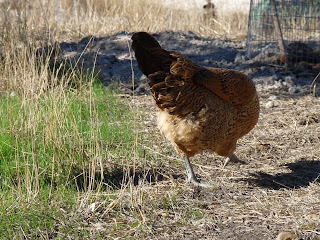 The past few evenings have seen temperatures in the mid- to low-20's F. The cold is nothing compared to what our compadres in the Northern and Eastern US are experiencing, but still cold enough to ice up the drinking bowls and Pools o' Woo by morning.

Earlier this week, before the worst of the evening cold temps hit, we received the coop heater and electric adapter that controls output by temperature sensing (it shuts off electricity when temps reach 45˚F). Got it rigged up in the coop, and then came the hard part: getting the girls INTO the coop at night.

You'd think we were trying to kill them.

They much prefer roosting in the cedar boughs. Can't say that I blame them; lots of room to spread out, and if they spread out far enough, nobody gets pooped on who might be roosting below. They roost pretty high up in the tree, however, so the trick is to get to them before they scoot up higher than our reach. It's a one-bird-at-a-time effort: grab one, shove into the coop, close the door quickly, all the while ignoring their scratching and squawking at the windows and doors while we attempt to grab the next one. They have no problem laying eggs in the coop during the day, mind you, but at night? Forgetaboutit. It's a veritable Chicken Chamber of Horrors! Not even chicken cryptonite - fresh corn on the cob - will lure them into that coop in the evening. 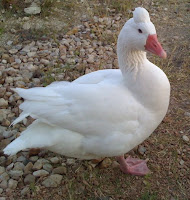 While doing the chicken grab, we also have to navigate around the geese. Godzilla does NOT like it when we manhandle the chickens, so he makes his displeasure known during the process. Once he starts squawking, the entire gaggle goes off, nipping at our heels and sounding like a pack of screaming chimpanzees. I wonder: is this why our new neighbors haven't introduced themselves yet?

I am SO looking forward to warmer weather...