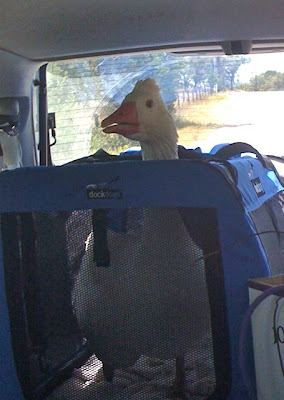 He was off standing by himself the other night, shaking his head now and again. Godzilla, being the lead gander, is rarely away from the gaggle so I knew something was up. Got him cornered, picked him up (which he does NOT love, natch), set him on the shelter roof, and saw that his right eye was inflamed and appeared to be pussing over. YIKES! Godzilla is the first of the geese Spouse and I raised by hand, and thinking there was something wrong with my feisty boy about tore my heart out.

Our vet was able to squeeze him in the very next day. Thank you Dr. Sheffield, and all the wonderful techs at the Wimberly Veterinary clinic! [By the way, the slide-show on their web site's main page includes a pic of an awkward looking teen-aged Billy-Bob, with some gosling fuzz still attached to his head.] Looks like Godzilla has an inflamed wound on his inner eyelid, a treatable issue thank goodness. Here's where the fun starts, however: I'm to squeeze antibiotic ointment into Godzilla's eye three or four times a day for the next seven to ten days. That means:
Yeah. Wish me luck with that.

[Pic: Godzilla in the carrier (reviewed earlier) on the way home. Of all the geese, he's been the only one to insist on standing and watching everything on the drive. The others sit until the car stops. He's my big goozul!]
Posted by d.a. at July 11, 2009

Email ThisBlogThis!Share to TwitterShare to FacebookShare to Pinterest
Labels: Godzilla