Spouse Writes: She Tricked Me 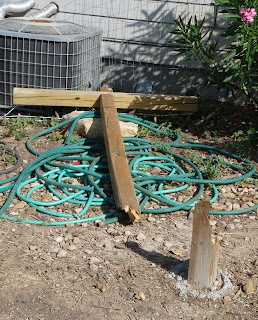 D.A. tricks me into screwing up. She doesn’t do it in a sneaky way or anything like that. She just gives me enough rope and points me to the nearest tree and waits for the hilarity to ensue. Case in point: she had eight bales of hay in the new trailer parked on one side of the house, and proposed that we used the wheel barrow to move the bales to the other side of the house. She obviously weighed the options and decided that towing the trailer to the other side of the house while dodging livestock, the barbecue, and the house may have been fraught with more danger than using the wheel barrow.

I, however, did not weight the risks as accurately. Not even close. I decided to show off (which means “Hold my beer and watch this!” in my family’s language) my trailering skills by towing the trailer to the closest spot possible to unload. Getting the trailer there was like getting into trouble. It seemed almost too easy until it was time to get out.

While backing up the trailer in D.A.’s car I mis-judged, mis-calculated and every other miss in the book except for missing the clothesline. I managed to snap the 4-inch by 4-inch wood clothesline post off at the base. Yes, D.A. – the trailer and your car were fine. 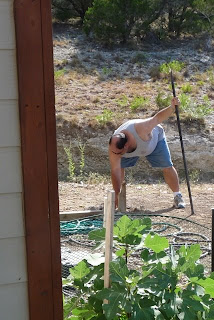 Thanks for worrying about my safety. [Hey – why is she snapping those pictures? I am pretty sure our insurance won’t cover a clothesline.] It was while I watched her giggle as she snapped photos that I realized I just gave her something to write about.

D.A. wasn't too hard on me. All she said was it was good that I did it and not her. I still not sure what she meant by that. It took two hours, 20 pounds of cement, and four blisters to pound an 18-inch hole into the rock/clay to put the new post in. See what I mean? I don’t know how D.A. tricked me. Not only did I screw up right in front of her, I even wrote the post telling how I did it.
Posted by Spouse at July 18, 2009

Email ThisBlogThis!Share to TwitterShare to FacebookShare to Pinterest
Labels: argh