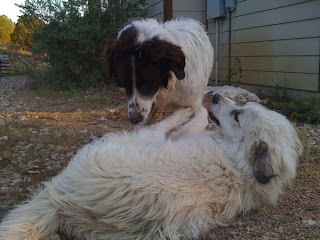 In the afternoons, I do a bit of auto-hypnosis before napping that I'll wake up if the animals need my presence. On Thursday, I woke up with a start, and heard the geese having a fit. Ran out to the pen, and see that the pups are having a bad case of the stoopids, with one of them on her back, tail a-waggin', while the geese are attacking the holy crap out of her. 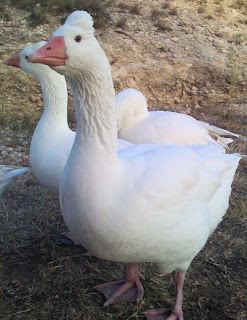 As I go in to break up the party, Godzilla accidentally smacks me on the ankle bone - hard - with his wing. Ka-waaaaang.... I could feel the impact's vibration all the way up my leg. I grab both dogs by the collar and throw them into their kennel. On the way back up the hill to check on the geese, could feel that something was wrong in my ankle. Since I was still walking, however, didn't think much of it.

I went ahead and got the afternoon chores done early, and laid back down. At 9:00PM, was awakened by eye-watering, amazing pain. Tried to get up, but any pressure on the foot with the injured ankle almost made me pass out. Thankfully, Spouse was home, and he rushed me into emergency, thinking I had a hairline fracture. As it turns out, no fracture, but have been ordered to keep the ankle wrapped and elevated through next week, and given a hefty prescription of pain-killers.

When I said that I was hoping to get some solid rest, I didn't think it would come about in this manner. Ah well!
Posted by d.a. at November 21, 2008