a geeky aside: new camera for the holidays 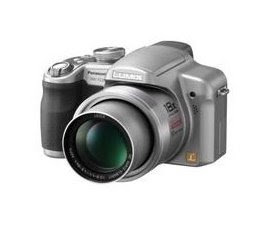 I previously asked Spouse for a Canon Digital Rebel Xsi DSLR camera for a combined holiday/birthday gift. Recent research on lenses, however, almost made me choke: I hadn't realized how pricey they were! I've rescinded my original request, and asked for a Panasonic Lumix DMC-FZ28S instead.

All I really wanted in a camera was the ability to take some decent long-distance photos and action shots (more than one frame per second). This camera will do that and more, all for less than the cost of a single DSLR lense. Although this Panasonic model has fewer extras than the comparable Canon Powershot SX10, enthusiasts report that the Panasonic's controls are more intuitive*. Sold! I'll write up a review after the holidays, but hopefully whatever photos I take will say much more.

* Just because I'm a geek doesn't mean I'm interested or competent in all things technical. In the past, I've been known to cover the flashing "12:00" with electrical tape if it started to bug me. And don't even get me started on the abomination that are blue LED's...