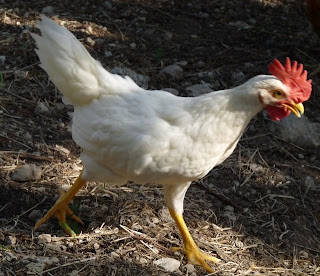 They must have been plotting, that's all I can figure. I thought I had securely closed the opening to the chick run, I really did. Alas, there was one teeny, tiny gap between the closing gate and the run. No sooner had I turned my back to refill their food that a dozen chicks came pouring through that gap like water through a sieve. The remaining six were still eyeballing the opening when I finally turned around and witnessed The Great Escape.

It was too darn hot to chase them all. Decided to do what some parents do with their children: "think you're old enough? Go ahead, be my guest!", and opened the run completely.

The geese came by and glared balefully.
The dogs came around and tried to eat the chick food.
The older chickens then came by and gave the "newbies" a lesson in pecking order.

During this brief time, the chicks have learned how to dodge and run VERY quickly. 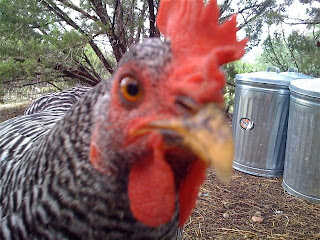 So far no permanent injuries, and hopefully a few cocky Leghorns now understand that they are not Kings of the Land. Frau rules the roost here, and you better not forget it.

(No worries, I'll scoop up the little buggers and put back into their run at dusk, when they go into their sleep fugue.)