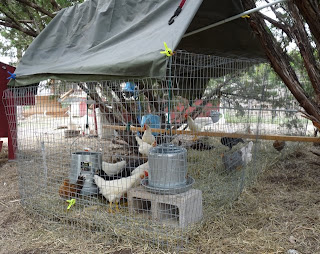 The flies were getting awful, and the chicks were getting big. Once more, new chick digs were in order. We had an old wire run sitting unused in the back, so I dragged it out to the cedar patch where we keep the laying coop and food. Not only did it provide more height, it also gave two extra feet in depth. Perches, food, water, tarp cover in case of rain... yeah, that was the easy part. The geese provided assistance and monitoring, of course.

Next: getting the chicks from pen "A" to pen "B". I'm only one person, so made about oh, say, a dozen or more trips back & forth between the pens, juggling a succession of eighteen wriggling chicks and trying not to lose any. I was unsuccessful in that regard. Yep, chicks got loose. It wasn't just me not keeping a good grip... there was also a couple of small holes in the back that I didn't think would be a problem, and by golly, you know what's next: that's EXACTLY what four of them found, and made their escapes. A total of six chicks out running free ("FREEEEDOOOOM!!"), and I had to catch the little buggers.

It took about an hour to catch the majority (fresh corn on the cob is still chicken kryptonite), but there was one little Leghorn who just wasn't taking the bribe. After about a half-hour of cajoling and running him around the cedars, finally set up a boxed-sides trap of blankets and ran him into it. Yoink! Got him! 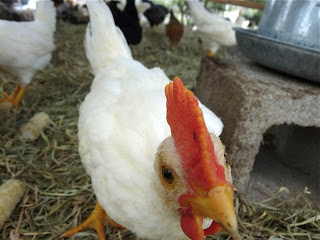 The chicks seem to be settling in and enjoying the new space. The geese are hanging out and watching the new denizens, like it's their private zoo. The older chicken girls aren't too interested yet, although Red (one of the older Americaunas) did give a young, loose Barred a lesson in pecking order when it came to the fresh corn.

Think I'm done for the day, and am glad not only for the chicks, but for myself. Now I don't have to listen to the strangled cries of adolescent roosters, trying to find their voices at dawn next to the bedroom window.