Round and Round We Go 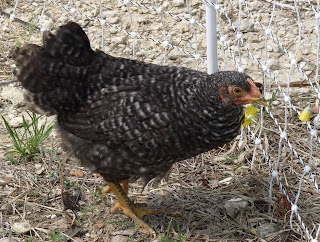 The poultry pen is pretty darn big, I'll admit. There's approximately 500 feet of netting that gets electrified at night. There's only one way in and out of the pen, a gated opening that's about four feet wide, and is left open for the entire day.

The chicks get out. Dizzy with the heady scent of freedom, they get confused as to how to get back in. I'll go out with a stick, and try to "herd" them back into the pen. The chicks will run opposite of where I want them to go. So I run them along the fence-line the opposite way until we get close to the opening. Then the chicks will change their mind and head away from the opening once more, in surety that the opening lay "elsewhere". I run them back around the fence-line again, get close to the opening once more... yeah, you know how this goes by now.

If I'm lucky, Bandit will be nearby and she'll help herd the chickens into the pen. If I'm unlucky, Maggie will think I'm playing and will bounce through the chickens towards me, causing the chickens to scatter. The chickens will figure this all out eventually, just like the first batch did. In the meantime I'm getting sunshine, exercise, and the opportunity to inspect the fence (again and again and again) so it's not all bad, eh?