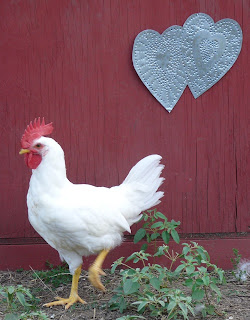 The roosters have discovered "girls". Girls are neat! Hey, you're a girl, let me jump on you! The rooster's libidos have turned on with the power of a freight train, and they're just as subtle with their intentions. If it were only one or two young roosters, the girls would have no problems keeping them in line. Eleven* Ten roosters, however, are turning out to be a problem. Even the snarliest of the girls - Nutmeg - is hard pressed to keep the roosters intentions in check.

I had planned on building the new chicken coop this week. Instead, I'm bringing back the large covered chicken run, and will install an extra corral at one end. Come nightfall, nine* eight unlucky roosters will be plucked from their sleep spots in the cedar, and plunked into a wired monastery. Poor boys.

[Edit: did some research, and the one Leghorn rooster I thought might be female actually IS female - females look like a slightly less showy version of the males. Tail feathers not as abundant, "jowls" and crest not as large. VERY lucky chicken.]
Posted by d.a. at June 11, 2009