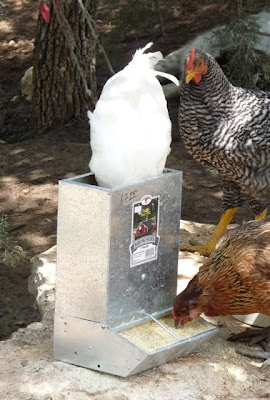 A vet visit for Miss Cecily the Goose - who was having problems keeping her wings on her back - showed that she was very thin (yikes! talk about feeling like a bad goose mom!). She might have looked like the fattest goose of the bunch, but as the vet showed me, it's almost all feathers. The other geese aren't nearly as skinny, but the vet declared they were on the thin side as well. I'm guessing nobody wants to leave the shady, cool spot to go eat at the main feeder. With the bright sun and searing heat, who could blame them?

The vet, bless him & his kin, arranged additional greens & veggies for the geese (besides what we already feed them in the mornings). One of his clients owns a restaurant, and she agreed to let me have the leftovers from meal prep. All I have to do is pick them up. Thank you so much, Linda!

We've also set up a new feeder in the shaded area. So far, the new feeder is working out well: so well, I may set up a second feeder in the shady area. The full feeder from yesterday morning was down to crumbs by the early evening. In addition, electrolytes with vitamins are being added to their water, and I picked up a bag of 30% protein game-bird feed to add to the organic feed. Gotta get the girls fattened up once more! As the Sicilian side of my family would say, "Eat! Eat!! You're so skinny, you're making me look poor!"