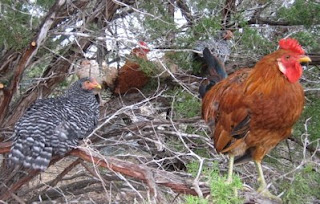 ...or cajole, or even bribe. I needed to get all the critters into the large pen early the other night, so I could go into town and purchase the pups their very own hard plastic kiddie pool (by recommendation of the LGD trainer** - and a post coming up about the pool, soon).
As soon as you even think you need them to be in a specific area, they give you Ye Olde Hairy Eyeball and scatter. It's a sixth sense. They can smell the desperation on you. I managed to catch four of the six within a record five minutes, giving them a gentle toss over the poultry netting into the pen. After ten more minutes of cajoling and pleading, the remaining chickens - Hausfrau and Thug2 - were still having nothing to do with it. "Aww, come on chickens! Come'ere pretty birds!" Nope.

Finally, I resort to a bribe: a fresh ear of corn. It's chicken kryptonite, a siren call, and CANNOT be resisted. I bend over at the waist, and wiggle the corn cob a few inches off the ground. "Heeere, chicken chicken! Heeeere pretty girls!" Aww, sh*t, wait: here come the previously penned chickens, pouring OUT of the pen. Alright, re-arrange posture and make like Quasimodo, lurching gently backward into the pen, swaying that ear of corn like a watch in a hynotherapy session. "Heeere, pretty girls!, Heeeere, chickens!". The bribe works. They're following!

Once inside the pen by a good six feet, I lay the ear of corn on the ground (carefully pulling fingers away from their avaricious beaks) and walk gently to the gate. Now on the other side of the net, I pole the netting fence/gate prongs into the ground like Michael Jordon with a slam-dunk. Yes!!! The crowd roars with approval!

Well, they do in my head at least. Maybe I should get that checked?