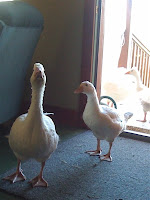 Way back when (oh, starting about four months ago), we'd raised successive sets of goslings in the living room. Once the weather was warm enough and the goslings were old enough, we'd put them outside. We had taught the first set - Godzilla and "Queenie" Kong - how to walk out the front door and down the patio steps to graze. Thing was, once they were outside "full time", we never seriously thought they'd want to get back into the house. 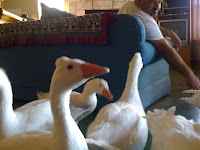 Last weekend, Godzilla had led the whole flock up onto the porch, as he does from time to time. This time, however, the front door happened to be open. He must have seen Spouse sitting on the couch, and decided to come in and revisit the "good old days". After Godzilla and his latest goose love - that day, it was Miss Cecily - were in the house for a few minutes, the rest of the geese gathered up their courage and followed suit. 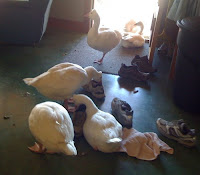 Once they were all inside, anything on the floor was considered a goose toy. Shoes were dragged and scattered everywhere. If it was hanging off a chair, it was chewed on. If something wasn't dragged or chewed on, it was pooped on. It would seem the geese had a wonderful time. Spouse mostly sat and watched, laughing at the chaos. 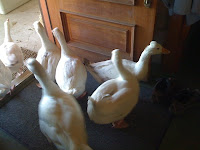 After about a half hour, the geese finally grew bored and toddled back out to the porch. It took Spouse two towels, a bucket of mop water and about a half hour to clean up after them. Thankfully, we have concrete floors and industrial carpet mats - easy to clean - but to think, some folks get pissy about geese on golf courses. Sheese!

[I don't believe Spouse is going to allow another goose invasion anytime soon. Say it with me now: awwww... ]