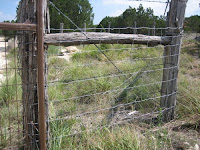 ...to keep your mouth shut." This saying is stenciled on a faux-rustic sign in one of my favorite Tex-Mex restaurants. That same saying popped into mind on Saturday afternoon, as I was watching Spouse and Uncle finish a 300' stretch of woven wire goat fencing.

It was near 100-degrees F that afternoon. The guys were drenched with sweat. It had been a frustrating morning, with wrong tools, wrong attachments, you name it, it was wrong. I wasn't feeling well, so instead of helping with the fence itself, I was bringing out beverages, food, and whatever else might be needed. Then I got a look at the fence.

It's not obvious from the picture unless you're familiar with the way this type of fencing is made. [Hint: look at the fencing up the vertical wood post on the right.] There's smaller openings on one side - in this case, the top of the fencing - with larger openings on the bottom. Weeeellll, it's supposed to go the other way 'round, ostensibly to keep out smaller critters... I mean, varmints like rabbits and foxes. I looked at the guys, looked at the fence, looked at the guys once more, and decided that "you know, it's not really all that important", and that this was indeed A Good Opportunity to Keep My Mouth Shut. To set the fencing right-side up would mean taking down all 300' of it and starting again from scratch. Uh, no. 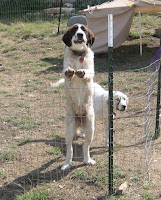 The next day, I casually mentioned it to Spouse. "So, are the smaller openings supposed to go on top with goat fencing?" "What smaller openings?" "You didn't see it? Huh, maybe I'm mistaken." An hour later, with a sheepish look: "Um, yeah. It looks like we did put it upside down. When did you notice?" "Yesterday, but with the way you two looked, figured it might not be the best of times to mention it." "Huh. Pro'lly a wise decision."