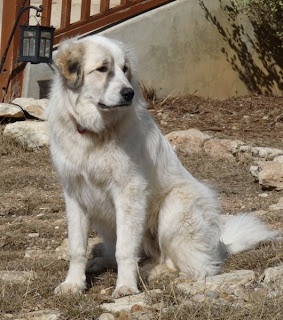 "Look out the window," I whispered to Spouse, "Maggie's eating the cayenne-filled egg!"

The goose egg (one of two) was the cumulative effort of over an hour of huffing and puffing to blow out the eggs, and then trying several different ways to fill the eggs with the rusty red spice per Chance's suggestion. Perhaps I should have also asked Chance for details on how she did it first. After trying (and failing) to fill the eggs with home-made funnels and straws before finally punching a hole big enough for a real funnel, much sneezing happened, and then I rubbed my eyes before washing my hands... d'oh! You can guess what happened, but no permanent damage was done to my eyes - just to the confidence in my supposed intelligence. I then partially hid the finished eggs in one of the empty goose kennels.

Back to Maggie: I watched her lick the tape off the hole where I had filled the egg, crunch into the shell... then an expression of confusion and horror covered her face. Spouse went outside as Maggie was backing away from the egg. Spouse grabbed the egg and held it up to Maggie's face... she continued backing away, looking in revulsion at what was once a tasty ill-gained treat. We're hoping she's learned her lesson. Thing is, did it take one or two eggs to teach her? We still haven't found the second egg.
Posted by d.a. at March 24, 2009