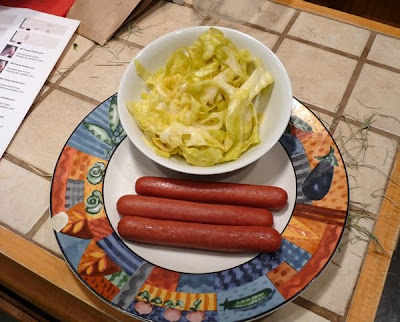 I'll admit something, however: I was a bit hesitant to try it out. It didn't look like the sauerkraut I usually scrape out of a can. The cabbage wasn't as finely cut, nor as translucent as store-bought. There was the memory of the past two failures, and the thought that "whoa dude, this stuff has been sitting in a crock for almost two weeks!" Me, the person who throws out leftovers no later than three days after storing in the refrigerator, is going to eat this stuff!

But, I did it. I pulled some of the kraut out of the crock with a pasta spoon (you know, the one with big "teeth" and holes at the base to let the water drain out). I put it in a bowl, alongside my favorite way to eat kraut: with hot dogs and yellow mustard. Ohmigoodness, but the kraut is yummy. No more store-bought stuff if I can help it, ever again.

If you've decided "hey, if that dork can make a successful kraut, then it shouldn't be a problem for me!" (and you'd be right), then check out my review of the cookbook Wild Fermentation. This is the book I used for the kraut recipe. If money's tight, there's a boatload of free recipes via Google search, too. If you decide to make it, I'd love to hear how it turns out for you!

[pic: sauerkraut with hot dogs. Yep, that's hay on the counter; had just packaged some goose eggs for a customer.]
Posted by d.a. at March 18, 2009

Email ThisBlogThis!Share to TwitterShare to FacebookShare to Pinterest
Labels: cooking