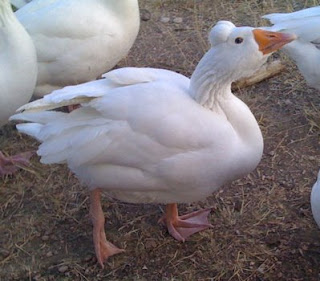 I noticed a bit of blood on Billy-Bob's feathers, peeking out from under his wing Sunday morning. At first it didn't look like much, but when he moved his wing, the slightly blooded area looked suspicious. Against our usual inclination towards self-preservation, Spouse and I decided to tackle Billy-Bob for a closer look. It took both of us to get Billy-Bob cornered to be picked up. The first failed attempt earned me a wing-beating and a bruise upside the head. The second grab attempt netted us the goose, and we quickly hustled Billy-Bob indoors and onto the kitchen counter to check him out.

Spouse and I carefully moved Billy-Bob's wing aside and checked the bloody area underneath. We freaked: under his back feathers it looked like a huge mess, and on a Sunday when no avian vet was open, of course! After calming down and cleaning the skin & base feathers off with a washcloth and spray bottle of clean water (plus a bit of calendula homeopathic remedy throw in for good measure), the wounded area was looking much better. The wound itself - which might have been a yanked out feather - appeared to have been already on the mend. Whew! 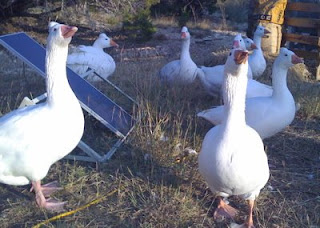 Although Billy-Bob was quiet and looked very calm while on the kitchen counter (probably scared out of his mind), once we carried him outside he immediately crapped all over me, wriggled out of my arms and then got the rest of the birds riled up into a HUGE ruckus. Spouse and I got our butts back inside the house before the geese started searching for the torches and pitchforks. Suffice it to say Billy-Bob and the rest of the gang are royally pissed off at us caretakers. It's going to take a truckload of tasty greens and several days before they'll forgive us for manhandling one of their gang.