It Was Indeed One of THOSE Days 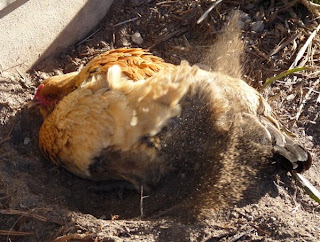 In the previous post, I briefly mentioned that the dogs got out. Chase, chase, nab; catch breath. I Twittered something to the effect of "Please don't let this be one of THOSE days!" Then not even 30 minutes later, Spouse noticed one of the geese staggering around. Uh-oh.

Thankfully the avian vet was heading into the office, and after describing Duchess's symptoms, he advised us to bring her in straight away. Turns out she was egg-bound, and had a huge soft-shelled egg stuck in her system. He drew it out & gave her a bunch of shots to aid in recovery*.

This in turn made us late for our plan to meet Joy and her family for lunch. I kept Joy updated on the vet happenings via text messages, and Joy took everyone to some of the local vineyards to buy us time. They then froze their butts off while waiting and holding our place in line at the BBQ joint. After lunch they beat an understandably hasty retreat, although we're not sure if it was to get away from possible bad-luck contamination, or to get away from the body odor. Spouse nor I hadn't a chance to shower or brush our teeth yet that day. Oof.

Later I got to figure out that I liked the smell of fresh goose poo MUCH better than rotting kitchen garbage. First, I forgot to take out of the car the towels Duchess had soiled during her ride to the vet. Nice warm car sitting in driveway + poo towels = an unmistakable Eau du Nature. Then in preparation to go into town, I put a bag of kitchen trash on the roof of the car between the rack mount bars, and planned on dropping the bag into the bin at the end of our driveway. Except I, uh, forgot to drop off the bag. Seven miles and 60 MPH down the road later, the bag finally bounces off the roof and rips apart on the road. D'oh! I hop out of the car, grab an old box laying on the side of the road, and gather as much trash as I can while dodging the occasional truck. Put the box into the car... and it reeked to high heaven. I drove another seven miles to the nearest gas station, dropped the box into the trash, and cleaned up as best I could in the bathroom sink.

With a deep breath and great trepidation, I considered the remainder of errands that needed to be done that day. If I continued, would I be a hazard to myself or others? Against the odds and all good sense, I decided to push on. The errands were successfully taken care of and I miraculously made it home in one piece.

I am now going to put this day to bed with a big bowl of chocolate-chip ice cream. That is, if we have any left.

[Pic: Blondie taking a dust bath. She was one of the few having a good day today.]

[*Duchess was looking more like her usual bright-eyed self as of this evening. The soft egg may have been a fluke, or it might be a genetic thing. The other geese are laying eggs with strong shells, and their feed is a laying ration with calcium. Hoping all will be well for her.]
Posted by d.a. at February 21, 2009

Email ThisBlogThis!Share to TwitterShare to FacebookShare to Pinterest
Labels: adventure