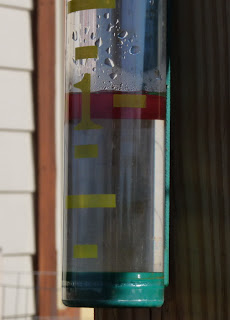 The howling wind took us by surprise last night. A rip-snorting storm front had come upon us, bringing high winds, pounding rain, and pea-sized hail. The wind was so fierce it was blowing the roof's rain run-off sideways. Spouse put on his rain gear, ran outside and turned off the electric poultry netting. The light showed the geese all standing at attention, facing into the wind and letting the rain run down their backs. Bandit was soaked to the skin, and scoured up some good sense in that doggie skull to hang out and guard from the covered porch. Maggie was nowhere to be found, and calls to her went unheard. I fretted about the chickens roosting high in the cedar trees, and hoped there'd be no injuries.

Almost as quickly as it came upon us, the storm was finished. The radar on the local weather web page showed a front that looked like a long, red gash sweeping its way across our area, almost 200 miles long. As usual, satellite television got knocked out, but we were able to keep track of storm progress via local chatter on Twitter and various weather web sites.

This morning found the chickens hale and hearty, mostly dry and with no visible injuries. The geese were fine as usual, and Maggie was waiting along with Bandit for her morning treat. The dogs' fur was soft from the rainwater soaking.

The fowl & poultry feed was wet despite its weather covering, but there's not much you can do about sideways rain. The newly transplated berry canes were fine, and probably loved the additional soaking. Same with the trees and pomegranate bushes. We received about an inch of rain, total. 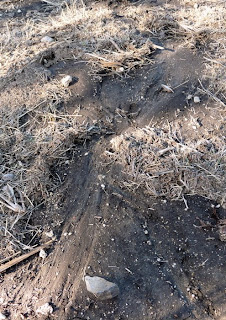 The grass seed and soil cover we laid down yesterday? Totally trashed. We had put down a mix of clovers, bermuda, and native grass seeds, and they all washed down hill. It's not a complete failure - the seeds will grow wherever they've settled, forming mini terraces and rain breaks - but it does mean that Spouse and I will need to re-do all that work. Between his shoulder recovery and my stitches, it will be slow going, but it needs to be done before the next rain event moves through at the beginning of next week.

So, today's tasks (slow and steady, as I'm still recovering): transplant the six lavender plants into the front flower bed, and re-seed/soil the front and side yards.

Despite the challenges, I love this place and the work we do here.
Posted by d.a. at February 11, 2009

Email ThisBlogThis!Share to TwitterShare to FacebookShare to Pinterest
Labels: weather