Saved by the Hot Pink, and Greens Check In 4.0 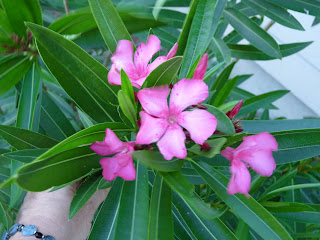 Oleanders. Precious hates them, yesss she does*. I grew up in an area where the county planted miles of oleanders in a dismal attempt to beautify treeless, long, dusty two-lane "highways". Oleanders remind me of those roads, where the soil alongside was so alkaline it turned white in patches, and summers hot and bone dry. Besides being hardy, oleanders are also poisonous, which is probably why the county planted them - less chance of wildlife eating them.

With these memories in mind, my goal this Spring was to tear out the lone oleander - planted by the previous owner - that resides in the eastern garden bed. It wasn't blooming anyways, and I wanted it gone on general principle. But then, behold: this week it bloomed for the first time. Hot pink blossoms. I hadn't seen oleander flowers of that color close up before, and I'll admit it, I've been entranced. So the oleander gets to stay until I order a shipment of rabbit-eye bushes (blueberries that grow well in Texas). Then hot pink flowers or not, that poisonous little biddy goes.

Greens check in: made a (non-CSA) kale soup with chicken broth and rice noodles, then put together a carrot raisin salad using yogurt and agave syrup. Letting the flavors meld in the refrigerator, and will try it out tomorrow.