aren't they too young for this yet? 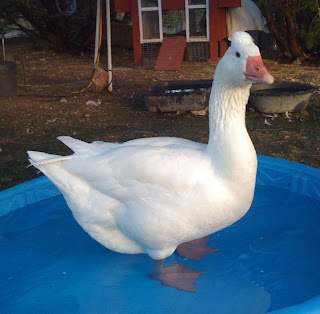 [warning: the following may be considered slightly risqué by the terminally uptight]

I'm not sure if they're just practicing or what, but it looks like the hormones have kicked in for Godzilla and The Girls. [Billy-Bob is not sure what's going on, but as he's four months six weeks younger than Godzilla, might still be catching up.] In the afternoons, one of The Girls will get into the kiddie pool with Godzilla. The rest will gather around, and Godzilla and his goose love of the moment will, ah, make woo. The surrounding geese honk and cheer them on during the event. Godzilla looks like Poseidon grandly astride a white crested wave, where the wave would be one of The Girls. It only takes a brief moment of honking and wing flapping, and then the woo is done. Afterwards, Godzilla looks content, and his goose love of the moment looks smug. Who knew geese could look smug?

Oh, and the previous post where I was concerned about the geese traipsing in and out of the goose kennel? Turns out, they're looking for safe egg-laying spots.

Wow. How quickly they grow up!