They're not yet fully grown, nor at full maturity. They still occasionally give a playful bounce towards a chicken or a goose (a big no-no, and fortunately becoming more rare). For the most part, however, their guardian instincts are kicking in and they're doing their job around the property. All we really need is for them to guard the chickens and geese, but the two pups seem to be developing specialties: 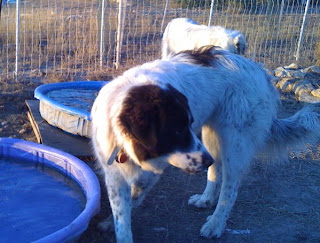 Bandit has learned how to gently herd the geese at dusk into their night-time pen. I've watched her do it, unassisted, a couple of times now. This is not something Spouse or I have specifically taught her, so I'm guessing she's learned from watching. She will also walk at my side when I herd the geese on those evenings when they need to head in early. As of last night, she worked with me in tandem to herd one side while I worked the other side. w00t! Now I just need teach her how to shut the gate, latch it, set the electric fence into place, and switch it on... what? 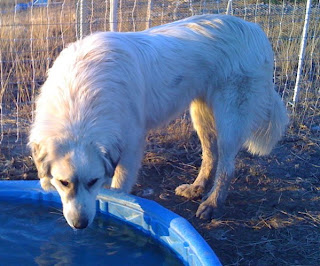 Maggie's specialty appears to be guarding the house. Bandit will patrol far afield (well, as far as the fenced-in eight acres will allow), but Maggie stays close. Some nights when she's by the poultry pen, she'll hear the back door close as I'm on my way out to work and come tearing around the corner, barking. Once she sees it's me, then it's nothing but tail wagging and butt wiggling and oh by the way, is there a treat? Treat? Yes?

After guarding throughout the night, they'll sack out during the day, usually sleeping wherever the chickens are hanging out at the moment (which is tough to do, as the chickens are constantly on the move). They listen for the geese, and if the geese give a honk of alarm they'll come running to check out the situation.

It's been nine months of hard work, teaching the dogs daily on basic manners and making sure they know who's the "alpha". It's finally starting to pay off. Good doggies!
Posted by d.a. at December 08, 2008